A Tepid Departure for Brighter Shores

Film historians, critics and audiences everywhere have largely forgotten Jamaica Inn, Alfred Hitchcock’s final British film before he began working in Hollywood, and after watching it for the first time, I can hardly blame them.
Based on Daphne du Maurier’s novel of the same name, this 1939 film is bundle of confusing aspirations and failures, beginning with the fact that the creative team hardly seems certain on what sort of picture they wanted to make. Hitchcock’s defenders generally blame this on the machinations of Charles Laughton, the actor who produced the film, starred in it and supposedly overcame Hitchcock’s notorious ego and imposed his own creative vision on the final product. Such claims are impossible to confirm or deny, of course. 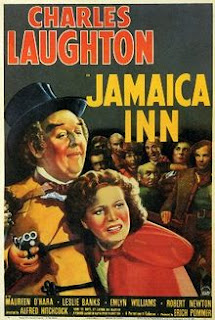 What we can talk about is what we see on-screen, and what we see is a historical drama that depicts a rather straightforward crime story through familiar elements of film noir and the swashbuckling/sword-play pictures popular from the 30s and 40s. If that mixture of genres sounds confusing, that is because it is.
Set in the 19th century, the film essentially follows the misadventures of Mary Yellen (played by Maureen O’Hara), an Irish orphan who falls into a nest of cutthroats when she lands in Cornwall to search for her aunt’s family. The cutthroats, who all work for Mary’s Uncle, play a deadly game that involves luring ships onto the Cornwall coast with false lights, killing the crew and then plundering the cargo. What little mystery there is in the film revolves around the identity of her uncle’s employer.
Mary’s unexpected arrival at the inn, and her subsequent discovery of the racket, is the convenient catalyst that launches a whirlwind of chases, captures, escapes, pistol shots and dramatic confrontations with raised voices. Unfortunately, none of it feels very dangerous, due to the ham-handed foolishness of the cutthroats, one of whom cannot stop whistling, and the quick revelation of the existence of a lawman in the gang’s midst (played by Robert Newton, the famous swashbuckler himself). Low production values that include bad sound, special effects that age poorly and some awfully obvious makeup work on Laughton do not help matters, either.
I also struggled to follow the film’s timeline. The action seems to occur in just two or three days, but with the vast majority of scenes all taking place at night, it is difficult to say that for certain. Being something of a Gothic affair, the choice of nocturnal settings does not surprise me. Unfortunately, the quality of the camerawork is not up to the challenges demanded by the plot, and as a result, we must suffer through scenes that are incredibly dim (see the above snapshot).
It is not all doom and gloom, though.
Laughton’s performance as Sir Humphrey Pengallan has been criticized by some, but I found his portrayal of a gentrified madman absolutely mesmerizing. The first clue that all is not well with Pengallan comes when he brings his horse into his dining room (precisely the sort of thing Caligula did). As bizarre as this is, it is not readily apparent to the audience that Pengallan is crazed until we witness his mania for luxury goods when he is in the company of the cutthroats he employs to further his aesthetic proclivities.

From that point on, he literally bounces jovially from scene to scene, excusing all manner of iniquity by his ironic claim of exceptional breeding (madness runs in his family) and his open desire to serve his preference for the good life, regardless of human cost. Such is the level of Laugton’s sinisterly-enduring performance, Frank S. Nugent is absolutely correct to write, “we can’t recall when we’ve ever held a monster in such complete affection.”
Hitchcock takes a stab at a further bit of psychology by chronicling the complicated and tender dysfunction of Joss and Patience Merlyn’s marriage, in which Joss beats her, abuses her verbally but ultimately takes care of her and stands up for her needs, which in turn, breeds affection and loyalty from her. More of this might have elevated the film beyond a plot that runs too fast between scenes to show what happens next, but instead, we are left with Laughton, and our curious pity for him at the end. That, too, might have saved this effort, as he is clearly the best thing going here, but Hitch’s usually astute radar for balancing motivation and action is slightly askew in most of this film.
Somewhere, inside this uneven jumble, there is a great movie trying to break through and blossom. The shame of it all is that it the breakthrough never occurs, the proverbial petals remain closed and we end up stuck in a valley of mediocrity, peering up at hill full of brilliant roses that might have been. Nugent argues Jamaica Inn “doesn’t seem like Hitchcock.” And while I cannot agree with that sentiment, because there are too many Hitchcock tropes on display here, I can understand why he wrote it. Hitchcock made better movies before Jamaica Inn (see Secret Agent or Sabotage), and less than a year later, he made Rebecca, which won him an Oscar. Compared to that record, to say nothing of all his other Hollywood masterpieces, this is disappointing. Period.
Posted by SKW at 1:41 PM