I grew up watching Disney’s 1954 film 20,000 Leagues Under the Sea on a video cassette – do people still remember those? – and I must have replayed the film a couple of dozen times. I was, in other words, something of a fan, though it would take me years to realize I had a proclivity to drift toward sea stories and even longer to realize why this was. (It is because they are, as one critic writing about Patrick O’Brian’s series of novels wrote, likely the only genre in which all of the great themes – man vs. man, man vs. himself and man vs. nature – can occur in one story). 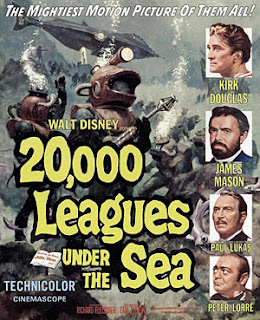 Returning to old ground smacks of nostalgia, and more times than not, the journeys end very different than we imagine when we begin them. I have wanted to watch 20,000 Leagues again for years, but I never seemed to get around to it, and part of my distraction, I suppose, was intentional, in that I was in no great hurry to ruin my memories of what up until that point could be a considered a “childhood favorite” of mine.  Is there not some part of us all that wants the integrity of Santa Claus to remain just as it was before we learned the truth and it fled forever? Fortunately, in this case, the cinematic return ended well: 20,000 Leagues remains a solid sea story, one with interesting characters and more than enough ideas to keep an adult entertained.

As for the special effects?

Well, they have not aged poorly. Indeed, I suspect they have aged much better than many of the insipid, CGI-infused creations we are currently subjected to at the theater. I suspect the effects matter less in something like 20,000 Leagues because the characters matters more, and when Kirk Douglas faces off against the giant squid in the sequence forever enshrined in the Disney theme park ride, we care about him and James Mason’s Captain Nemo a great deal more than do about whether the tentacles of the beast flail realistically enough. If you want a touchstone for a comparison to see what I mean, try and recall how unimpressive the similar sequence is in the Johnny Depp Pirates series. One cannot imagine that scene, that film – indeed, that film series – firing the imaginations of young children five years from now, let alone sixty years from now, as the above-mentioned depiction from Jules Verne’s timeless novel has. 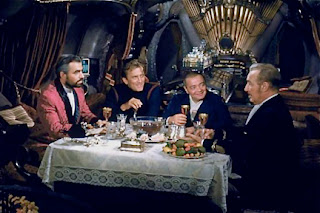 However, the fiber that holds this film together all these year later is the matter in between the sea monsters and underwater sequences. As I already suggested, the performances of Douglas and Mason, to say nothing of Peter Lorre and the lesser known Peter Lukas, are something to behold. Between the four, the audience is afforded glimpses at human archetypes as the group wrestles with the mysterious Captain Nemo’s competing shades of subtle brilliance and melancholic revenge.

The backstory, which should be familiar to all, is Nemo’s rage towards unnamed nations that ship arms that fueled what passes in the film as a loose kind of economic imperialisms. The details of Nemo’s angst are never made fully clear, but this lack of filling in the blank works in the film’s favor. Free from political commentary, Nemo and his lust for revenge that take center stage, while Douglas, Lorre and Lukas look on and puzzle over what to make of it with their very different levels of intelligence, personalities and ideological inclinations (or lack thereof in the case of Lorre – a coward – and Douglas – a brave but politically unconcerned sailor). 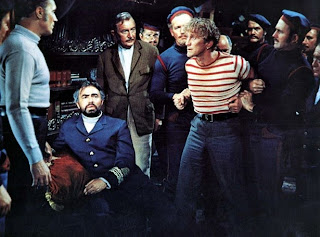 At odds with the violence, Nemo and his crew live in almost complete harmony with sea, taking what they want from it in food and supplies, as they cruise across the world – largely under the waves – in Nemo’s own monster, a metal-clad submarine that is virtually unstoppable in the age of wood and sail. The Nautilus only rises to replenish supplies or whenever it must become the embodiment of Nemo’s rage and plunge headlong into a ship, sinking it by opening up its timbers upon contact. There is something demented and childish in this. One man’s nightmare of revenge is visited on the world through an instrument he uses to literal bash against things until they are no more. How different is this than the senseless child, who full of anger, will repeatedly hit his head against something? Not much.

Like many Mason characters, Nemo (Latin for “no one”) is classy and cultured. He has an extensive library, an impressive mind and a first-rate accent. But as the movie makes plain, his revenge ensnares the guilty and the innocent alike. The ship Nemo sinks with Douglas and company aboard was sent to discover Nemo and stop the killing, not carry war materials to abuse an unnamed population, and it is unlikely that Lorre and Lukas are the first civilians blameless in the wars Nemo believes he is stopping that end up in the water because the Nautilus encountered their vessel and sunk it with no remorse for the bodies left in the water. 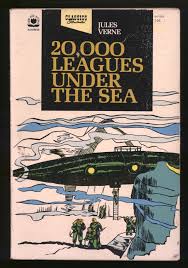 What we have here then is revenge without responsibility, an oddity when one considers Nemo is railing against men who fund and arm wars without accepting responsibility the havoc and death they cause. It is possible, I suppose, that Nemo began nobly, but that his rage eventually consumed him and he ceased to be selective about whom he lashed out against in his submarine. In the Verne novel, Nemo is far more sinister and obviously mad. That he is not in the film is likely on account that this is, above all else, an adventure picture for children and sheer amounts of dastardliness can only be depicted so much.

The comparisons to Ahab here are easy to reach for, but viewing it from our perch some 60 odd years later I propose that we can indulge in the reality that this film appeared amid the height of the Cold War, an age in which atomic submarines began plumbing the depths of the world’s oceans, playing a game of cat-and-mouse not unlike what is on-screen here. Indeed, within a few years of the film’s release, those same submarines grew larger and started carrying a cargo of nuclear weapons that are far deadlier than anything Nemo imagined and real submarine named U.S.S. Nautilus sailed under the North Pole to prove a submarine could slip close enough to annihilate the Soviet Union if called upon to do so. The world, as they say, was never the same. 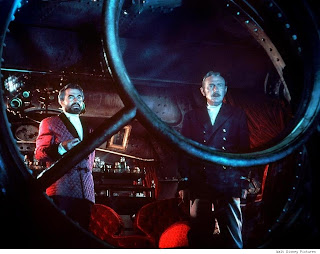 We glimpse some of this in Nemo’s decision to scuttle his submarine at the end of the picture. Nemo does so because humanity is not yet ready for the technology he unleashed in his machine (it is suggested his submarine is in fact nuclear-powered). This, the film’s almost solitary political pronouncement, could not have been lost on discerning audiences in the cold winter of the mid-1950s. What we are to make of this today, I am not sure. That the verdict on humanity is still out? That such machines should be only in the hands of capable people? Or that responsibility has shown itself, in some form, in the fact that we have not succumb to baser emotions and annihilated one another, even though we now have the means to do so? I suppose we each all have our answers, but at the same time I am fairly confident that we can all agree with one of the film’s other messages: That power in the hands of the irresponsible tends to destroy everything in its path – and then, eventually, the irresponsible destroy themselves.
Posted by SKW at 11:37 AM No comments: