The End of Something?

Hollywood’s fascination with the ancient world makes cinematic sense.
Films are comprised of a great many elements, but above all else, they are visual journeys to a proscribed reality representing a time and place different from our own. Even a contemporary film about contemporary times is artificial in the sense that any narrative structure, by definition, is a representation of reality – not reality itself. Along these lines, it is not surprising filmmakers love costumes and settings that allow them to dabble in world-making, and if one is going to whisk the audience away to somewhere else, why not some other time? But even these points cannot truly account for the spate of sword and sandal films that erupted in the wake of D. W. Griffth’s Intolerance and continued to land on the screen for almost 60-plus years (longer if we include Ridley Scott’s Gladiator and HBO’s Rome).
What else is at work, I suspect, is an attraction to grandeur and momentousness, both of which are tough to spot in one’s own contemporary existence, where and when we tend to remain unimpressed with ourselves – or at the very least, accustomed to our own achievements and challenges. Thus, chariot races become infinitely more visually compelling than moon-landings. 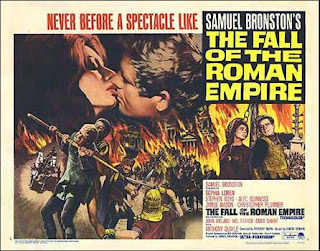 Griffith called his aforementioned effort “colossal spectacle,” and the same description certainly applies to 1964’s The Fall of a Roman Empire, a film that attempts in about three hours to surmise what Edward Gibbon chronicled in several volumes of words. And while it is true this film fails to capture the scope and notoriety of the collapse of one of history’s greatest political systems, it must also be said director Anthony Mann’s attempt sputters along in a rather magnificent fashion. All $20 million of the budget is clearly visible in the picture’s astounding costumes and sets and there are extras galore in the battle scenes. Whatever else it succeeds or fails to achieve, one cannot argue the filmmakers here failed to pay enough time and attention to all things that look, feel or smell Roman.

The opening scenes in the wilds of Germania are particularly well done. Indeed, anyone who smitten with the supposed incredibleness of CGI-animation should return to this film and these scenes and gander at the Roman Fort, perched on the edge of the Empire. Most of the set was probably created through a combination of mat-paintings, miniatures and balsa wood, but it looks stunning on film when the vassals of Marcus Aurelius parade in front of him to pay homage. The rest of the film is equally impressive, too. I read where a total of 55-acres of outdoor sets were constructed, and frankly, I will take this passé extravagance over the computer-spun realities inflicted on us today.
Even more impressive is how this film, which is openly bent on grandness, also takes the time to get unimportant details correct. I was pleasantly surprised, for example, to see a lictor standing behind Commodus with his axe of bundled sticks (this is called a fasces in Latin). I doubt many people notice that, but if you are attempting to get it right, actually doing so requires such diligence and care. 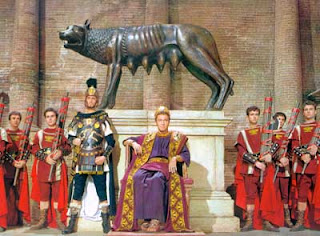 If the same attitude was applied to casting, this film might have been more than it is. Two of the critical roles Mann picked absolutely correctly. Alec Guinness is perfect as the wise and moody as Aurelius, the thinking man’s emperor, while Christopher Plummer is delightfully wicked and snide as Commodus, the pompous fool whose inability to impress his father leads to a demented quest for personal glory that eventually threatens the entire Roman way of life. The acting problems begin with Sophia Loren’s barely palatable turn as Lucilla – Aurelius’s daughter – and goes from bad to worse with Stephen Boyd, whose wooden portrayal of a Roman general comes damn close to derailing the audience’s ability to enjoy the film.

I have mentioned Gladiator, the film by Ridley Scott, and it goes without saying that I will have to mention it again, for that film borrowed so heavily from Mann's effort that it might not have existed without it (entire scenes and subplots are lifted, literally in total). Gladiator is a good film, and certainly more enjoyable than this effort, but what it added in entertainment, it lost in ideas. Plunging the audience into the sands of the arena might titillate, but it does not intrigue. What exactly was Rome? And why was it so worth fighting and dying for? Gladiator plays at answering those questions, but ends up pursuing an empty notion of revenge with not much else at stake, whereas The Fall of the Roman Empire powerfully explores what is lost when Rome falls (honor, citizenship, a chance to live in relative safety and free from harm).
That Rome's grandeur is seemingly pulled down by one man is completely inaccurate, historically speaking (Rome flourished well after the 180 AD-ish time period depicted in the film and went on being Rome until at least 476 AD), but it is compelling nonetheless. Plummer's Commodus is manic and desperate, but he is also not his father's son (and he knows this) and he lashes out at the world more from an inability to find a place in it than from in sort of feverish spite. At the same time, Sophie Loren is forced to oppose her brother in order to try to save her father's legacy.  That she winds up as corrupt as Commodus even as she strives for noble purposes is a testament to the film's disturbing message about the collapse of social cohesion. Stephen Boyd attempts to remain true to himself and true to Rome, but in the end, he witnesses his army and its commanders bought off with gold, and the citizens of Rome drunk on the improvised glory of Commodus and his new and idolatrous cult of personality.


For Boyd it is a frightening moment, one in which he truly becomes a son of Aurelius, for like the departed emperor, his life's work is made meaningless by the whims of a populist mob who has lost all sense of self. For the audience living in uncertain times, both then and now, it is strikes a chord of warning. When a society forgets its pride, when it ceases to defend itself and work toward greater ends, then it truly loses its way and its worth. The penultimate scene, wherein the throne of the empire is auctioned off to the highest bidder, shows how much and how little the title has become, thanks to collective social abrogation Commodus and his reign of terror gave voice to.
In film-making terms, the real tragedy of The Fall of the Roman Empire is the demise of the type of storytelling it employs and the subsequent absence of ideas it wants to wrestle with. Epics today are back in fashion and many of them are no more compelling than their empty-headed predecessors, thanks I am afraid, to the resounding thud of Mann's Herculean effort made at the box office. And yet, somewhere between the high-mindedness of Mann and the brute force of Scott, there is a great film about a great empire to be made. Unfortunately, I doubt anyone has the courage to attempt it. It would be too difficult to get your arms around and too confusing to today's studio heads and audiences. Therefore, in lieu of better efforts not-to-come, seek out this original and marvel in what it manages to do very right.
Posted by SKW at 6:29 PM No comments: