No doubt there are plenty of people who watch 1962’s The Manchurian Candidate today and come away thinking it little more than a period-piece, or a kind of curiosity that chronicles an opaque form of paranoia from the Cold War that seems as alien to them as the once-held belief in the divine right of kings. 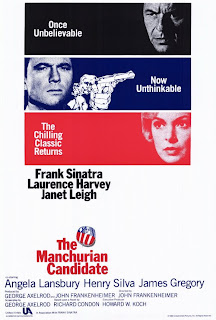 However, dismissing John Frankenheimer’s calculated adaptation of Richard Condon’s novel on such grounds is a mistake. For starters, I can think of few other films where the imitation of life is as brilliantly warped and overdone – and at the same time as strangely accurate – as this one. That is, we know now that the Soviet Union and its ill-begotten allies really did believe they could brainwash people in political reeducation camps, a plot point that would seem to be cooked up by a kooky screenwriter. We also know the Central Intelligence Agency experimented on methods to both control minds and resist the mind control efforts of their enemies (the infamous MKULTRA project that included a certain compound that later gained famed as LSD). Conspricacy-laced political thrillers that have just a touch of truth may be common fair these days, but in 1962 – when the majority of Americans still trusted their government – the genre was just beginning to find its own feet.
All of which is a roundabout way of saying that The Manchurian Candidate is avante garde filmmaking masquerading as a boorish crowdpleaser (and in doing so, mimicking one of its lead characters quite intentionally). The end-result is a film that may chronicle the dark and often difficult to discern Cold Way conflict better than any other effort, minus Stanley Kubrick’s Dr. Strangelove. Only, unlike Kubrick’s dark and wickedly cynical slice of satire, Frankenheimer plays it straight and serious. Audiences today might snicker at the lengths the Chinese government undertake in the film to train and condition an assassin capable of propelling their candidate to office, but the kernel of truth within what is obviously hyperbole and artistic license is worth mentioning.
There is little doubt today, thanks to FOIA disclosures and solid historical work by scholars such as Christopher Andrew, that the Soviet Union possessed agents who had thoroughly penetrated the U.S. government in the late 1940s and early 1950s. Indeed, the Soviet espionage apparatus stole what could be viewed as the ultimate secret – and in doing so, reshaped the balance of power in the entire world – when agents affiliated with the infamous Rosenburg couple ferreted out the knowledge needed build an atomic bomb. And if you can steal the power of the sun, how hard could it be to try to shape an election?
These are the kind of visceral historical thrills the film produces, but there are others. Besides all the politics and the espionage there is a fundmentally human story, burgeoned by a pair of powerful performances. Angela Lansbury’s portrayal of Mrs. Iselin is a bone-chilling reincarnation of Shakespeare’s twisted Lady MacBeth. She is at once perfect and unsettling, outdoing the Scottish noblewoman, in that she uses and manipulates both her amenable husband and her recalcitrant son. She is all ideology and narcissism, and perhaps the most disturbing part of her portrayal is the realization that partisans such as her, partisans willing to sacrifice everything – family included – to further their aims, are real and remain among us. 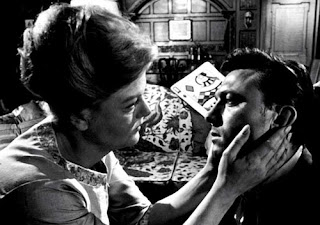 Laurence Harvey’s performance as Raymond, her distinctly unlovable son and prodigal son is the film’s other standout – not Frank Sinatra’s turn as the Army Major haunted by what happened in Korea. Harvey is the picture of frustration, the boy whose overly doting mother never allowed him to become a man. When he finds love, she wrecks it. When he finds fame and success, she capitalizes on it for herself. Throughout, he wrestles with great demons, unsure of how and when to act (like another Shakespeare character). With his father dead and Sen. Iselin living in his father’s house, there is an Oedipal striving in Harvey and his outbursts. His love interest is attractive enough, but one cannot help but feel his attraction for her only grew when he learned she is the daughter of his step-father’s fiercest political rival. Becoming involved with her, means he is screwing his step-father and his mother at the same time. 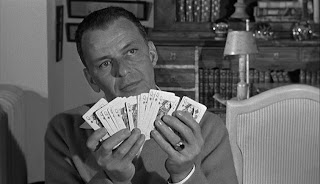 However, the film saves its ultimate irony and its ultimate revenge until the end. By killing his parents, Harvey becomes a real hero in place of the phony one he has been throughout the film. The irony is that it took an act of familial betrayal to get him there. “Poor Raymond,” Sinatra says, summing up a man whose entire life seems to have been burned away by the powerful flame of Lansbury’s insatiable ideology. In this, the film seems to be saying that the most dangerous people are the ones who have nothing but their principles to lose and nothing but the revolution to strive for. A person’s politics and patriotism are one thing – suborning both to some imaginary cause something else entirely. This was the inherent danger of the Cold War and its Marxist idealists. Like the religious fanatics plaguing the world today, they seemed to have no earthly cares. Ideology was everything . . . and I can think of nothing more dangerous.
Posted by SKW at 7:49 AM No comments: