The Greatest Nonsense of All

What can I say about one of my favorite films of all time?

I once compelled my three best friends to accompany me to AFI’s opulent theater just outside the nation’s capital so I could see North by Northwest on the big screen. Neither the wonderful setting – all classic film lovers should go there – nor the film disappointed. 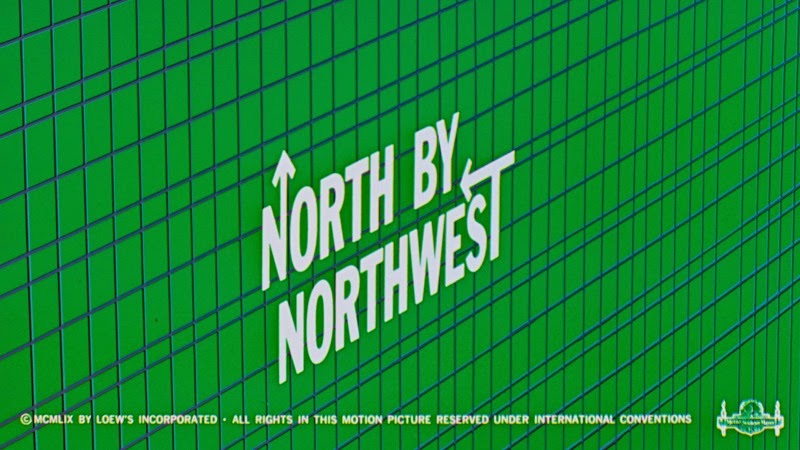 Alfred Hitchcock made better pictures, with greater depth and a more detailed examination of the human condition, for sure, but none of those Herculean efforts comes even remotely close to this outing in terms of sheer cinematic enjoyment. Put simply, this movie is like candy or whatever other guilty pleasure you enjoy: You know it is ridiculous and you probably should not be eating it, but you savor every bite because of its inherent wonderfulness.

The plot of Alfred Hitchcock’s masterpiece, which does not stand much scrutiny, revolves around a rather juvenile case of mistaken identity that eventually leads to attempted murder and some grand chases that all eventually have something to do with international espionage. Cary Grant, whose smarmy turn as the smug Madison Avenue advertising man has rightly attracted adoration, famously quipped to Hitchcock that the film had a terrible script and he could not make heads or tails of it. Hitchcock told Grant he was unconsciously repeating his character’s lines. I leave it to the audiences to determine who is more right, but there is a sort of uncontrolled zaniness in how film rushes – almost madly – from one scene to another, until, in perhaps the film’s most famous sequence, everything slows and there is nothing but silence and the drone of an airplane for several agonizingly long minutes. 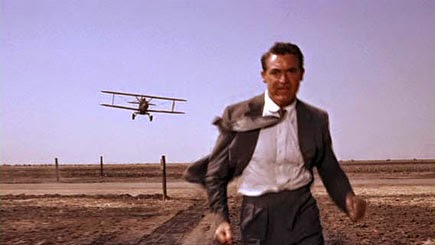 The crop duster chasing Grant might not have aged well – the crash, in particular, looks and feels a little silly – but the scene’s inherent power remains. After being hurled through the plot, Grant is finally dangled a respite that hints at some sort of resolution to his case of mistaken identity, only to be attacked and propelled back into the fray yet again. However, to assert the whole movie, like this scene itself, is completely bewildering would be a mistake. The fields surrounding Grant in the iconic scene are intentionally as grid-like as the title sequence, signifying that there is a deliberate pattern to the film, one in which almost every line is carefully constructed to edge the plot along in its general direction, which is, geographically speaking, Northwest.

At the same time, Hitchcock himself said he practiced “absurdity quite religious” when interview by Francois Truffaut, and this is never more on display than it is in this film. From almost the film’s opening scene, when Grant tells us that “In the world of advertising, there's no such thing as a lie. There's only expedient exaggeration," the film motors along, with barely a care as to how realistic its various parts are functioning. But at the heart of all its madness, as I have already suggested, there is indeed order, as many of the scenes themselves show us. The library Grant is accosted in is immaculate. Later, the wilderness he encounters his lover in is equally as ordered. From chaos, comes a kind of order, Hitchcock is showing us. And thus, his film works and it becomes believable after it has stewed in its own irreverence. 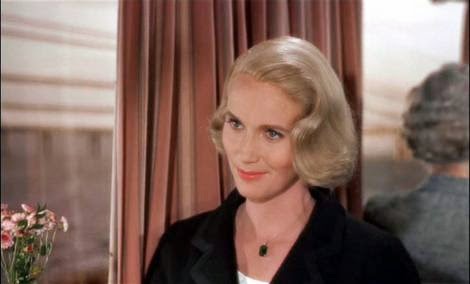 Along the way, there is a great deal of fun. Grant is pitch-perfect throughout and Saint manages to be both sensual and smart at the same time. Indeed, the knows more than our hero does for much of the picture and outmaneuvers him on her way to marrying him, a theme later repeated by Hitchcock in Rear Window. The scene between the two on the train to Chicago is also an amazing exemplar of how the scripts of yesterday were forced to dance around sex with flirtation and suggestion, both of which seem preferable to where movies have sunk to today.

At the same time, it is also interesting to note precisely how close the film is to a Bond movie. There is a cultured villain (Mason), the scenes on train reminiscent of From Russia with Love and the showdown on Mount Rushmore feels like a Bond ending, though perhaps one with less gusto.

No matter, a foot hardly is put wrong in this effort. The acting, direction and general melee of a picture all conspire together to create great enjoyment, none of which I think has abated today. The theater I saw the film in was packed and had people of all ages. From the comments I gathered after, the film was thoroughly enjoyed by all, no matter how much of it was sheer and utter cinematic nonsense…
Posted by SKW at 4:27 PM No comments: