In honor of America’s birthday last week, I have cobbled together a mini-tribute of three film classics that I believe say something about the nature of American Exceptionalism. Not much in vogue these days, the concept of the United States as a “city on a hill,” driven by very different impulse than its European brethren was first suggested by John Winthrop as he and his pilgrims bobbed off the coast of what would become the Massachusetts Bay Colony. The phrase itself would come later from Alexis de Tocqueville, who described the United States as "exceptional" in 1831. As I have already suggested, it is not terribly politic to talk in such terms anymore, but the idea itself, and indeed the smaller, component ideas that makeup the larger concept, are alive and well in classic film ... if you know where to look. 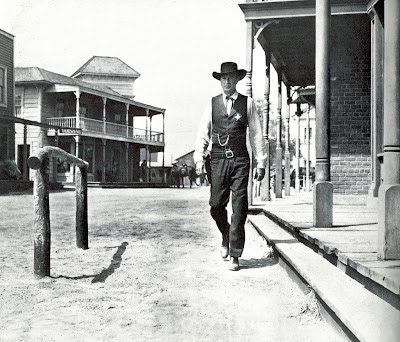 The quintessential “new sheriff in town” film, only Gary Cooper is the regular sheriff (not the new one), and in this case, his refusal to kowtow to a gang of bandits and leave town is what drives home the film’s larger points about what good men do – or at least should do – when they encounter evil. The metaphor here is not hard to find, and in retrospect, it can be stretched in a number of ways it probably was not intended, but which in my opinion only make the film greater and a more powerful presentation of American values. When threatened with the return of an infamous gang Cooper once locked up, the townspeople refuse to form a posse with him and face down the brutes. Instead, they want Cooper to leave town, thinking that with him gone, they can make a separate peace with the bullies through talk and concessions. Cooper knows otherwise and says as much, but nobody listens. So he decides to stay and take on the gang himself.  The essence of the “strong, silent type” that is in much less supply these days, he faces the gang for the sake of honor, but more than that, he does it for the sake of order, realizing that laws do not mean anything if they are enforced only when it is easy and convenient. What is that? A Cold War parable you say? You bet. Cooper is America, standing up to the Soviet Union and all the tin pot dictators of the world, while the rest of the community of nations prevaricate and argue for understanding, deal-cutting and anything other than confrontation (hey, it is safer, right?). The scene where Cooper confronts the townspeople in Church and they blame him for the fact that bad people want to do terrible things is particular poignant and has obvious real world corollaries. In the end, America (Cooper) stands on its own, doing the ugly duty that must be done, because no one else has the stomach for it. 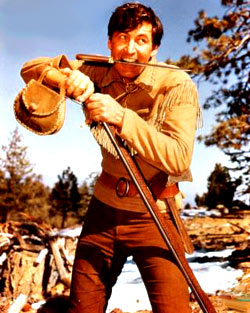 A film impossible for red-blooded youngsters to dislike, this beloved Disney classic might present a surface-level view of history, but its enduring personification of America’s frontier spirit more than matches this undertaking's deliberate shortcomings. Fess Parker became a boyhood legend, thanks to this movie and its accompanying television program, and 1950s America briefly went coon-skin cap crazy, as boys everywhere took to the woods with wooden rifles to domesticate their own stretch of wilderness in suburban America. At its heart an adventure film, Parker nonetheless manages to embody the boldness that drove America west. At the same time, Parker’s Crockett moves from a scout who helped Andrew Jackson hunt down rogue Indians to a Congressman who passionately defends Indian rights and excoriates the increasingly ridiculous treaties his former commander foists upon the defeated tribes. The more cynical might call this revisionism, but the real Crockett did indeed break with Jackson and he essentially moved to Texas in response to his disgust with American policy. He famously died at the Alamo, defending the defenseless in spite of incredibly long odds. Accordingly, Crockett embodies the individual at war with federalism, and as such, is something of a Jeffersonian idealist-come-folk hero. 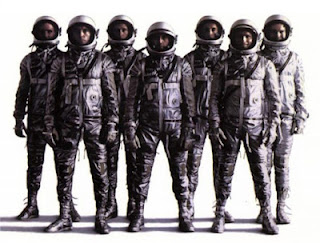 One of my favorite films of all-time, this part-Western, part fictionalized documentary captures not only the essence of American can-do entrepreneurship, but also something profound about the very nature of what it means to be human and to seek achievement for achievement’s sake. Ego plays a great role in both, and there is plenty in this film, in terms of America’s Mercury Astronauts, six of whom eventually blasted into space during the early 1960s in the now-defunct but once much remarked upon space race against the Soviets. Each of the astronauts is a competitive, egoist but each also serves something greater. The reasons American went to space are complex, but the results are not. Leaving the planet and exploring the near solar-system is a historic achievement not just for the nation but for all mankind, a point this film captures in between its depiction of patriotism and shared-sacrifice. However, at an even deeper, more primal level, we have the story of Chuck Yeager, the man who was not an astronaut. Yeager's incredible spirit, his unquenchable desire to go faster or higher is the brutal embodiment of the basic impulse that drives all human endeavors, and I cannot think of another film that captures this quite so well. Meanwhile, as a nation, America achieves as a whole in this film because it believes it is great and that it should achieve. If that's not exceptionalism, I don't know what is...
Posted by SKW at 7:59 PM 4 comments:

He talks with a languid toughness that manages to sound both intimidating and wise at the same time and whenever he struts across the screen as a soldier or cowboy he comes across as completely legitimate, despite the painful obviousness in many of his performances. 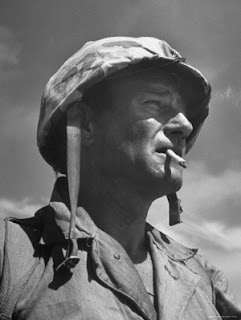 In 1949’s Sands of Iwo Jima, Wayne puts his best boot forward – and collected an Oscar nomination in the process – when he offers up equal doses of stoicism and sympathy in his now-legendary role as the no-nonsense Marine Sergeant Stryker. It is not an exaggeration to say that the very stereotype of the hard-as-nails drill instructor originates with Wayne and this performance. It is also not an exaggeration to assert Wayne being Wayne in this film is precisely what saves an effort that otherwise would be a profound piece of propaganda celebrating the legend of the Marine Corps.

Because as I said, this is not altogether incredible stuff. 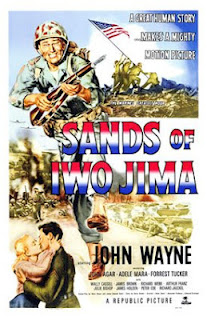 There is a kind of paint-by-numbers with these World War Two epics: The platoon or company is always the center of our attention and it is typically comprised of souls with immediately identifiable accents and at least one personality trait that enables the viewer to remember something unique about that character when he is spotted among the rest of the cast. Part of this is economy, because nobody needs a film with a dozen developed characters, and part of it is filmmakers giving the audience what they expect from the genre (see Saving Private Ryan). Sands of Iwo Jima may be decades old and made within living memory of the actual event, but quite a lot of World War Two films had already appeared by 1949, many of them with Wayne in them, and Hollywood knew what people wanted. More complicated war films, with less obvious tracks, would not come until America began to grapple with how to depict the Vietnam conflict on the screen. 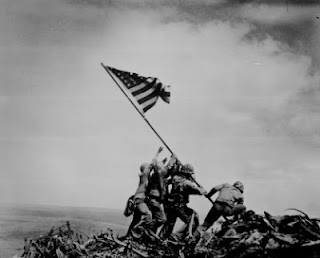 In the case of this film, the American triumph on the tiny island of Iwo Jima signified by the iconic flag-raising ceremony on the summit of Mt. Suribachi was known to virtually every American. The photograph, taken by Joe Rosenthal, had not only graced magazine covers and posters, it had also been used extensively as propaganda piece to raise war bonds (see Flags of My Father). The decision to graft a challenging, if somewhat one-dimensional and episodic plot, on top of a film building to an inevitable event therefore deserves some credit. Stryker could have been more boorish and more boring, and in the hands of a lesser actor he might have been. 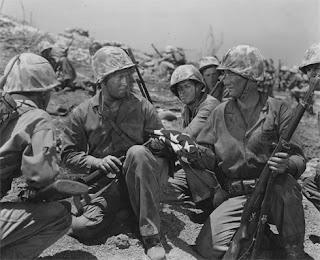 Wayne makes him believable and he does not with his bark but with the pained scowl he gets whenever he is confronted by another’s failure to perform or on the occasions when the awfulness of failure attempts to impose itself on his life and the fate of his men. There is a telling scene when Wayne encounters a baby belonging to Julie Bishop after a brief romance in her home. The father is gone, either dead or disinterested, and Wayne is painfully reminded of his own estrangement from his child, and haunted by the possibility that he too may one day leave a woman without a man and a child without a father, should he fall combat.

The scene plays well on Wayne’s running confrontation with John Agar, the arrogant, college-educated son of an officer under whom Wayne served. Agar is the smart-aleck recruit who presents his sergeant with a problem. This would feel stale and prosaic were the father/son motif not the foundation of the turmoil. Wayne watched an officer he loved as a father die, and now the son of that officer is under his care. What is he to do? The answer is make certain the son is ready. 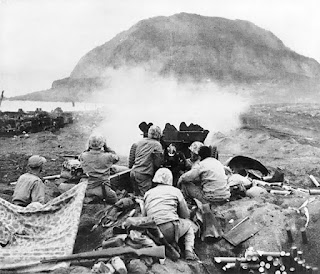 On the American side, the battle of Iwo Jim claimed upwards of 6,000 men and 19,000 casualties, including the lives of most of the men in the famous flag-raising photograph. All but 200 or so of the 20,000 Japanese soldiers on the island died in combat. The latter of the two statistics speaks to what manner of battle the American Marine faced on the island – the enemy, almost literally, was willing to fight to the last man, and nearly did so. America's triumph should be viewed in martial terms that take into account those horrific numbers, but also in the more human tones painted in this film. When Wayne, rather inevitably, falls, his men find a letter on him addressed to his estranged son, saying all the things he wanted to say but could not find the strength to do so while he was alive. It is a cliched moment perhaps, but it still makes the audience feel nonetheless. Here is a tireless warrior, a man among men who trained other men to do great things. And here, laid bare, in a letter he knew could only be posted after he died, is his soul. He was unbreakable as a Marine, but even Marines are people, too.

The Greatest Little Steamboat in the World

It does not get much better than this ... for classic films fans.


The African Queen, the dingy, rundown hooting and smoke-spouting little boat from the 1951 classic starring Humphrey Bogart and Katharine Hepburn has been refurbished and put back on the water -- where it belongs. One wonders who the audience will be ... or not so much. After all, Suzanne and Lance Holmquist, the couple who found and refurbished the boat do live in Florida, a location likely to attract an older, more appreciative crowd for what is surely an iconic piece of film history and Americana. Found in a Florida marina (see this news story), the boat looks better than ever and hopefully has a few more memories left to make...

See also my review of the film.