It is not everyone’s favorite dish, but if you like the sort of old-fashioned mystery wherein a great detective magically solves a crime involving what initially appears to be unrelated people and unrelated facts, then Sidney Lumet’s Murder on the Orient Express is probably your best bet, in terms of quality and craftsmanship. 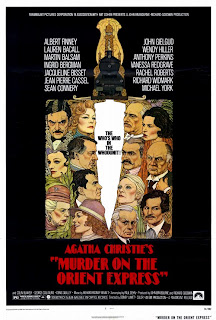 The 1974 film based on Agatha Christie’s novel of the same name is bolstered by a heavyweight cast of actors that includes Lauren Bacall, Ingrid Bergman, Sean Connery, Michael York, Anthony Perkins, Albert Finney and Vanessa Redgrave. Bergman collected one of her trio of Oscars for her portrayal of a Swedish missionary whose faith in God far outstrips her command of English.
﻿
﻿

I will not attempt to describe the plot here, as it would be difficult to do and would remove the satisfaction of seeing it play out on screen with total ignorance. Suffice to say, a murder happens to happen on the Orient Express, the grand dame of all great railway lines (it ran from Istanbul to the coast of France) and Hercule Poirot (Christie’s fastidious detective) happens to be on board when the foul deed is committed. In the wake of the killing, the film’s plot revolves around Poirot’s skillful set of interviews with the train’s first-class passengers, none of whom, of course, are what they initially seem.
There is a fine line in these kinds of endeavors between success and failure. That is, like the police procedural, there is a rather plain formula at work in these kinds of films (indeed, the audience almost expects the formula, and consequently is disappointed if it is absent). Therefore, the game for the creative team behind the film is how to reinvigorate old tropes so that they feel new – even when they are not – and in the process, keep the audience guessing. This is, after all, a mystery – and it should be mysterious, right?
Put into practice, this involves enlivening conversation, as much of these films revolve around clues revealed via dialogue, and creating a memorable set of characters who must manage the complicated feat of standing out and avoiding obviousness at the same time. Typically, as with all of these kinds of potboilers, the actors chase their goal through lavish overacting.
The trick, of course, is to keep the overacting within the bounds of acceptance and away from the bounds of annoyance. For the most part, Murder on the Orient Express manages this tightrope dance quite well, and even injects some humor into the proceedings, via some snappy remarks and not-so-subtle sarcasm. The film looses some of its early vim in the middle portion, and I cannot help but feel like the final revelation fails to deliver on the early promise that plays out in a wonderfully eerie opening montage.
But make no mistake: This is dinner theater done right, if that is your thing. A wonderful cast, high production values and a lighthearted aura of whimsy make this film well worth the time of both the mystery aficionado and the viewer in search of some simple entertainment that does not involve clashing robots, superheroes or various other platforms for incindiary special effects...
Posted by SKW at 11:50 AM

Email ThisBlogThis!Share to TwitterShare to FacebookShare to Pinterest
Labels: Mystery