Lost Horizon, a rather uneven 1937 Frank Capra film about a utopia hidden among Tibetan mountains, begins with a simple question, spelled out in the film’s opening image of a book with calligraphy writing:
In these days of wars and rumors of wars – haven’t you ever dreamed of a place where there was peace and security, where living was not a struggle but a lasting delight? 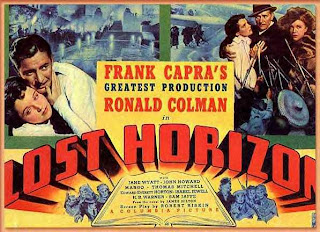 The simple answer, of course, is “yes.” We have all, at one time or another, dreamed there is place within this world where we would worry less, struggle more moderately and enjoy ourselves a great deal more. Indeed, most of the major faiths in the world hold out the hope that our corporal existence, caught up as it is in growth decay, is but a stepping stone to an eternal life, in which much of what make human existence unsatisfying will be absent.
As a film, Lost Horizon (based on the James Hilton novel of the same name) is well aware of these shared beliefs, and it unintentionally functions as a kind of ideological litmus test. Either you believe – or want to believe – it is possible for a rural village isolated from the rest of humanity to function in perfect harmony or you think the entire premise is the farfetched plot device of a dreamer pounding out his foolish philosophy on a keyboard.
As for myself, I fall heavily in the latter category of viewer, and not entirely because I want to. Having read Francis Bacon’s New Atlantis and Thomas More’s Utopia and Aldous Huxley’s The Island (to name just a few), I was fully prepared to accept the idea that a fictional community, isolated from what we understand as the rest of the world, could theoretically develop in ways quite different from actual societies, and that the theoretical differences of the fictional community, no matter how idealistic or impractical, could help illustrate the strengths and weaknesses of a genuine society’s political arrangements. This is, after all, precisely what the aforementioned authors were trying to do.
Unfortunately, Lost Horizon fails to match the literary explorations of social organization mentioned above precisely because it fails to present a political philosophy to account for its fictional utopia. What we have instead is what Pauline Kael called “high-flown cracker-barrel sentimentality,” in which the Tibetan village of Shangri-La is flush with affluence, health, happiness and peace for no other reason than one of the lead characters says so, and everybody around him behaves accordingly.
However, this is not to say the film is entirely without merit.
Capra’s overall direction is practiced and professional, and the cinematography and the sets are something to behold, even if Grahame Greene was right to quip that Shangri-La looked a lot like a Hollywood estate. Ronald Colman’s portrayal of British Diplomat Robert Conway and Jane Wyatt's turn as Sondra are both excellent performances, rendered even more so by the relatively amateurish efforts of their ill-used supporting cast (who at times disappear from the film's plot entirely). 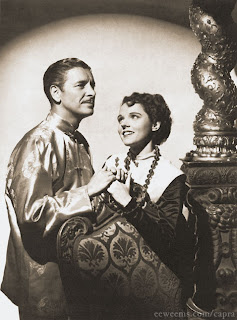 The action proper begins with a chaotic scene at a Chinese outpost where Conway is helping to evacuate British subjects from the onrush of an unnamed war. After escaping with his brother on the last plane with a motley trio of passangers, there is a series of taut scenes in which the passengers gradually realize they are flying in the wrong direction. Bad goes to worse when the plane goes down in the middle of a mountain range whose cold and remoteness promise certain death. When the passengers are rescued and taken to Shangri-La, a peaceful valley shielded from the weather and the world by the size of the peaks surrounding it, the mystery concerning the film's whirlwind opening only deepens.
At this point, the table seems set for a rather delightful adventure story, full of mystery and suspense. Instead, in comes the ideology and out goes just about everything else. The set of characters on the plane and their complex interactions are dropped the moment they enter Shangri-La and the focus shifts to Conway and his internal struggle between his desire to remain in Tibet and serve what he believes is a higher purpose and his duty to his country in a time of impending war. The other characters, for the most part, are left to their own devices, appearing only sporadically and when the plot demands it. So unimportant do they become, they are left entirely out of the film's bizarre climax.

We never really learn what Shangri-La is, beyond the basic facts that it was created by a lost European missionary (Father Perrault) in the 18th century, and there is no war, seemingly no vice and no lack to make people unhappy. People in the valley also tend to live longer, hundreds of years longer. As a high official named Chang explains, the key to all this success has to do "with our general belief ... in moderation." (and here I was thinking it might have been Krispy Kreme donuts).
This is about as complicated as Chang gets, beyond an explanation that in Shangri-La people are encouraged to “be kind,” and since no one wants for anything, they abide by this advice and get along well with one another. The middle of the film is chock full of interminable scenes to detail how happy everyone is and how happy their happiness makes most of our stranded travelers – the plot demands, of course, that somebody is unhappy, and in this case, it is Conway’s brother, George.
Bereft of any other data, we almost accept the circumstances on screen at face-value. I say almost because they are several flies in the ointment. The first comes when an incredulous Conway asks what a married man would do if another man was interested in sleeping with his wife. Without missing a beat, Chang replies that if the other man wanted the woman that badly, then the husband should be kind enough to offer his wife to the lustful suitor. Although Conway is initially stunned by this response, he ultimately accepts it at face value, and the filmmakers expect the same from the audience.
There are plenty of reasons the explanation is patently absurd, not the least of which is the fact that Hilton – or Robert Riskin, the screenwriter – seem to never have read Homer – or any of the other Greek classics, in which the emotional primacy of sexual possession, and the jealousy and rage it can provoke, is the meat of many a great drama. In addition to our civilization’s collective literary memory, we all have minds and organs and can well understand how the two often work at cross purposes and wreak havoc on us.
The film’s internal shortcomings are even further exposed during its climax, when Conway is convinced by his brother and his brother’s love interest that the High Lama was a madman and Shangri-La nothing more than an opulent prison. Conway, who has just been named as the replacement for said High Lama and has been extremely clever throughout the film, decides to take the pair at their word and depart with them for the arduous journey back to civilization. The notion of using his newfound power to figure out what’s what or confronting Chang or Sondra inexplicably seems to never to occur to him.
The climax is further tainted by this conundrum: If Shangri-La is truly a utopia, then why was Maria – the longtime Shangri-La resident involved with Conway’s brother – so desperate to leave? Having apparently lived there for hundreds of years, she must have known she would die – or, at the very least, age considerably and become unattractive to Conway’s brother – if she left the valley? And yet, she chooses to leave anyway. At the very least, this proves she was unhappy, something supposedly impossible in Shangri-La, right? No further motive for her subterfuge about Shangri-La or her decision to flee is ever provided.
In sum, a film about ideas – especially a film that all but jettisons plot and characterization after an hour – has to have ideas rigorous enough to withstand scrutiny or the effort fails. Lost Horizon is bold on sentiment – even if the entire Shangri-La enterprise seems somewhat excessive if the only real goal is to save cultural artifacts from "coming wars" – and it relishes exploring its central character's dilemma, but neither is enough to save it from its overt absurdities and our inability as audience members to continue to suspend disbelief.
If it works for anything, it works as a fine example of what an expensive picture looked like in the late 1930s. Lost Horizon's budget was in excess of $2 million – an absurd figure for that day and age.  When it was released, it was a poorly reviewed, box office failure that nearly bankrupted the studio. Capra himself is rumored to have been incredibly unhappy with the final product. Since then, it has achieved a kind of cult status as an exemplar of being ahead of its times (in terms of scale and setting) and foreshadowing many of the big blockbuster adventure films that followed in its wake. Both claims are undoubtedly true, but Capra undoubtedly made better pictures, and no amount of skill and production can overcome the simplicity of this source material.
Posted by SKW at 9:08 PM