One is never wrong if they call Citizen Kane the greatest American film of all time. 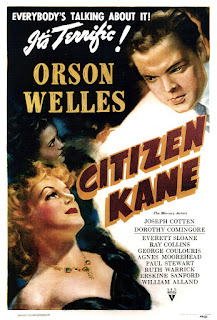 Unfortunately, this safety net has in fact come to work against the film in recent years. Many people coming to the film for the first time are so overburdened with expectations concerning the picture’s sizeable reputation that their first viewing inevitably leaves them both disappointed and rather curious what all the fuss was about to begin with. Others resist labeling Citizen Kane ‘the greatest’ for other, more obvious motivations: They want to be different and buck the convention wisdom.

Neither condition applies to me.

I first encountered Citizen Kane in a high school film class and I found its perspective, wherein a newspaper reporter interviews several characters about Kane and the narrative of the picture leaps between time periods in an almost disjointed fashion, completely enthralling. For me, the richness of the film’s themes, its technical achievements and its overall artistic vision have not dulled with time, either. This is quite simply the greatest American film ever made, no matter what criteria one is asked to consider, and it will remain such, I believe for eternity. 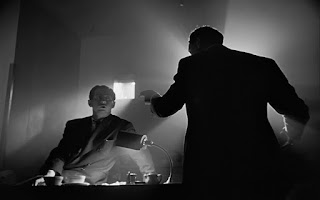 Indeed, there are so many angles one can come at when discussing Citizen Kane—a testament, I believe, to its greatness—that one almost does not know where to begin. There are its many technical achievements, in which set design, costuming and makeup reached hitherto unforeseen heights in film. There is the cinematography. Never before had light and shadow been used so effectively, actors positioned in such crucial ways and cameras positioned in such strange and wonderful places (Orson Welles famously cut the floor out of some sets to shoot up and at his actors from their feet to make them appear larger than life).

However, the construction of the film’s narrative and the underlying themes that narrative contains are where I believe Citizen Kane is at its greatest. 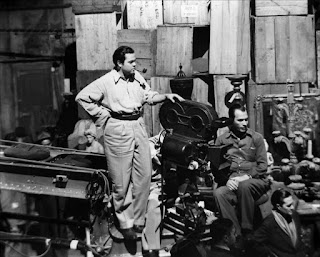 Orson Welles, a man who needs no real introduction to contemporary readers, for better and worse—mostly worse, if you know anything about Welles—was at the height of his powers when he made Citizen Kane and the choices he makes as a storyteller are inspired. I have no evidence Wells read William Faulkner or James Joyce, but the notion the conventional narrative underwent a serious revision in the 1930s and 40s should be apparent to even the most casual reader of American and world literature from that time period.  Furthermore, Welles in his infamous “War of the Worlds” broadcast had already demonstrated during the 1930s that he had a penchant for turning the conventional narrative on its head through the innovative use of established mediums.

His application of this in Citizen Kane is clear in that he takes the traditional film noir narrative of a mystery in need of solving (in this case about Kane’s last words), fatalism and trust and betrayal and enlarges the genre to tackle nothing less than the entirety of the American dream and what it means to gain and lose things (people, power, love, adoration, hate and prestige). In a film so about narrative, it is telling we never hear from Kane himself. Rather, he is a corpse from the very first frame of the film and instead we hear from those who knew him at his best and his worst, as the narrative leaps here and there and provides sharp and soft shards of a man’s life, who by his own account could have been a great man, but was not. 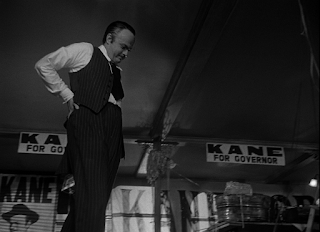 And yet, for all the cinematic bells and whistles (and what a movie this is JUST to watch, even on mute), for all its tricks of camera and flashes of brilliance, this is at its heart a film about people and their failure to interact with another, to love one another and to live to meaningful lives. All of the characters in Citizen Kane are haunted ghosts, empty reflections of a former “greatness” that when peeled away turns out to be far more prosaic and ordinary than we first believed. Kane’s longtime sidekick still remembers a nameless woman he never spoke to but glimpsed on a New York pier, Kane’s best friend just wanted to write an honest review of Kane’s wife because he could not remember how to do anything honest. 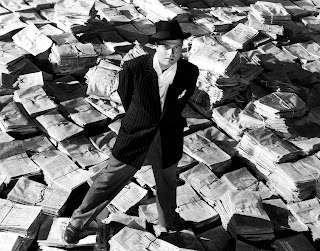 These are small, simple acts (or non-acts) and yet they all had more impact than Kane’s failed gubernatorial bid or the Second World War on all of those involved. That is because in the end, Citizen Kane is about the roads not taken or the decisions made or not made and what each of those moment renders in the years that follow. What is a life but the fragments of where it touched other people? Kane’s physic interior can be guessed at, but never known. What can be known, both by him and all the other characters, is the decisions they all made and how those decisions created their lives and formed them into the people they became. Thus, Kane’s “Rosebud” was a sleigh ride never taken, a life of complete ordinariness in Colorado wilds that was never possible after his mother sent him East with his millions. 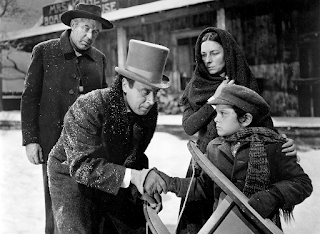 That he seemed willing to trade all the subsequent moments, all the subsequent decisions and outcomes for a chance at that lost life is the tragic nostalgia at the heart of Citizen Kane’s power as a film. For who among us believes every path we chose was the correct one? That all of those roads not taken were truly unworthy of exploration?
Posted by SKW at 5:31 AM 1 comment: