As Cool As They Come 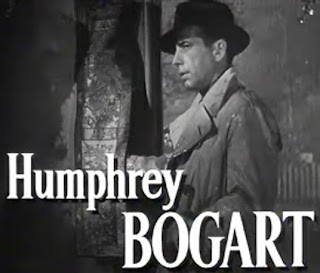 The first in our series of biographies focuses on Humphrey Bogart (1899-1957), the iconic American actor who defined toughness and cool in 75 classic films.
Born in New York City in 1899, Bogart is thought of today as the prototypical leading man and exemplar of all things American and masculine during what many consider to be Hollywood’s golden era of studio filmmaking (roughly 1930 through 1950). However, he was not a leading actor until the early 1940s and he did not win an Oscar until 1951’s The African Queen.
Bogart’s eventual enshrinement atop the Hollywood pyramid as AFI’s Greatest Male Star of All Time in 1999 is somewhat curious if one examines some of his constituent parts.
﻿
﻿He is not, for example, a large man. Indeed, he is almost impish and diminutive on-screen. Not quite angular enough to be considered handsome, he has the odd appearance of resembling paper crumpled into a ball and then straightened back out again. In terms of speech, he is a kind of one-man quote machine, who spit out lines in an almost irreverent fashion, only to see them enshrined as paragons of good dialogue, quoted down the decades, even by people who probably have not seen his films. Among the more notable:
Were it not for Bogart’s extraordinary on-screen charisma and confidence, his jerky mannerisms and machinegun style of talking could easily have condemned him to eek out a career as the odd kind of character actor we generally associate with Peter Loire. What saved him, beyond his obvious talents, was his incredible on-screen presence and the fact his devil-may-care coolness has never been equaled (not even by Brando or Dean).
Early in his career, he was typecast as a gangster or a hood, leading him to complain that “nobody likes me on sight. I suppose that’s why I’m cast as the heavy.” Later, he was typecast almost as the opposite: A private detective, soldier or silent idealist, waiting for the right moment to shrug off his skin of overt cynicism and act heroically (see Casablanca). In all these roles, he was something of a stoic, prone to quietly accept the various inequities of the world, even as he secretly smoldered against them.
He also cultivated an image of being working class, competent and opposed to phonies, dilettantes and authority in general. In this, his real-life expulsion from Andover and his subsequent rejection of whatever elite he encountered seeped on the screen. But for all his rebellion, both real and imagined, Bogart was a classic Hollywood insider. Spencer Tracy gave him his nickname, “Bogie.” And Bogart’s fourth – and by far, most famous wife – was none other than Lauren Bacall, whom he met while filming To Have and Have Not.
If his career suffers from anything today, it is a lack of range. The aforementioned typecasting (common to the era) meant that Bogart was never really given the chance to exhibit his true abilities as a performer. Indeed, as I have already expressed elsewhere on this blog, many of his portrayals seem so similar as to be entirely indistinguishable from one another (see his turn as Sam Spade and Philip Marlow, performances which almost exactly mirror each other). Bogart nearly always played Bogart, and there is nothing wrong with that, because it is Bogart we are talking about here. Other actors may founder on their persona and their inability to disappear into a role, but Bogie’s presence overwhelms any shortcomings in his craft. He was, quite simply, a movie star of the first order.
Career Highlights Include:
Casablanca
The Maltese Falcon
The Treasure of Sierra Madre
The African Queen (Reviewed here).

The Caine Mutiny
The Big Sleep
An official Bogart website can be found here.
Posted by SKW at 12:10 PM