It is difficult for the first-time viewer to approach Roman Holiday with anything like objectivity.

William Wyler’s 1953 romantic comedy about a princess who escapes from her handlers to experience the beauty and splendor of Rome on her own created the cinematic formula for just about every romantic comedy that followed. It also, in many ways, is the film that launched a thousand study abroad programs in Europe for American princesses keen on seeing something of the world beyond shopping malls and sand-covered spring breaks. 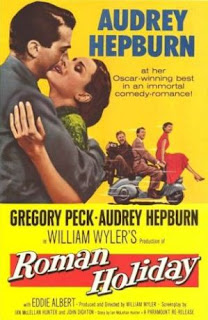 The film itself has three essential problems, one of which it cannot help.
The first is the core of the plot: A young and naïve girl who has plenty of money and status escapes her lavish life, goes on an adventure and falls in love with hardscrabble reporter – the latter of whom initially gives her the time of day because he wants the exclusive on her story. We have seen a great deal of all of this before in the Frank Capra classic It Happened One Night, and for my money, Capra’s effort with Clark Gable and Claudette Colbert outshines Roman Holiday in just about every aspect, including believability, though I am willing to grant such a thing really does not matter in this genre.
The second problem is casting. Audrey Hepburn was born to play a princess, but Gregory Peck is the absolute wrong man to put beside her delicate, elfin form. Peck is a fine actor, of course, but he is far too rigid for this role, and as a result, we never quite believe that he is the kind of rakish reporter who sleeps through assignments and then lies to his editor about it. Even worse, the notion that the ethereal and fun-loving Hepburn could fall in love with Peck’s stern gravity seems farfetched (he comes across as her father). When I imagine Cary Grant in Peck’s role (Grant was in fact offered the part), the film becomes more enjoyable. 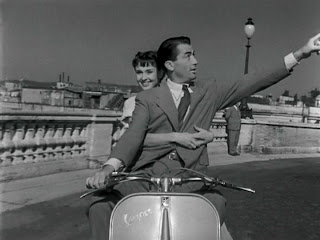 The third and final problem – the one the filmmakers cannot really help – is that this is a movie built around imagery. More specifically, filming in color was sacrificed in favor of shooting on location. Lavish passages with Hepburn and Peck cavorting on Capitoline Hill or riding a scooter on real Roman streets are the tangible results of this decision. These scenes (and others) were undoubtedly incredibly attractive to a 1950s audience, most of whom had no idea what Rome looked like. Consequently, the scenes do not work quite as well on contemporary viewers, some of whom will have actually been to Rome, while the rest have no doubt seen it on television, in books and online. Rome, in other words, cannot be as equally arresting today as it was then.
Before the torches and pitchforks come out and people accuse me of stomping on what for many is a beloved cinematic whirl, let me quickly add that despite its shortcomings Roman Holiday hums along with an intangible magic that just about every contemporary romantic comedy forever reaches for and misses. Exactly what the critical ingredient Roman Holiday has and its successors do not is difficult to pin down. 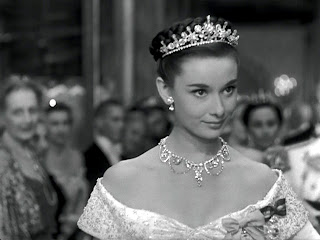 I suppose part of it is Hepburn herself. Although she is too flighty for my fancy, her performance here is beautifully precise, in that she manages to act aloof and unobtainable at the same time she oozes charm and fun. The openning scene, where her royalty is in full effect, is poked fun at by her taking off a slipper (under the safety of her lavish gown) to scratch an itch with her foot. This is pure Hepburn, and I do not suspect there is a male in America who would mind sharing a scooter with her or taking her dancing on a warm night in Rome, though whether the proverbial male could date her for an extended period of time is an entirely different matter.
In its initial review, The New York Times said the film soared because of its “perfectly believable happenstances.” To reiterate an earlier theme, after some 60-plus years later of romantic comedies, I believe audiences are fairly jaded with such happenstances that we now see them clearly for what they are – carefully crafted plot pointss that unfold exactly so and produce near clockwork like emotional responses. However, Roman Holiday remains amazingly fresh, despite its age and its innumerable imitators (Notting Hill actually robs scenes and re-writes them).
Two of the better passages involve Hepburn getting her hair cut and receiving a speeding citation for her now infamous scooter jaunt. The fight that breaks out on her night of dancing – to say nothing of the rather silly escape – is more farfetched and less believable. 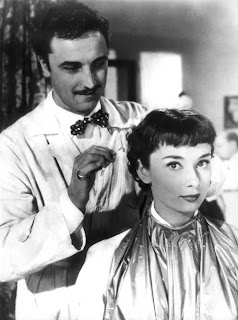 But towering over it all, what really works is the warm – and ultimately bittersweet – message of the film: Chance encounters can lead to love and life-altering experiences, but all too often these encounters are chained to a particular time, a particular place and they are not made of permanent stuff.

The indeterminate nature of the film’s ending, in which Hepburn slyly acknowledges Peck’s affections during a press conference, but then seems to close the door on a shared future (given their differences in age and stature), would never stand in today’s everything-ends-well moviemaking world. Herein the film's greatness lies. It is self-aware, honest and it understands what the “holiday” is for its main characters and what it is not. This truly makes it a film for adults and a film for the ages.
Posted by SKW at 1:34 PM