The Flame That Could Burn More Brightly

Having consumed a dozen or so books on Nelson, along with all of the C.S. Forester’s Horatio Hornblower’s and Patrick O’Brian’s naval adventures, it would be fairly impossible for me to not take some measure of enjoyment from That Hamilton Woman, a 1941 film depicting the outrageous love affair between the aforementioned admiral and what was perhaps the most scandalous and beautiful woman of her day. 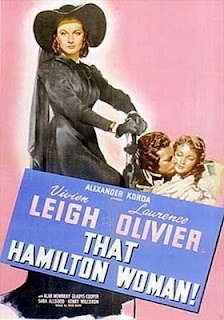 Winston Churchill, himself no stranger to history, reportedly watched this film close to 100 times, an odd piece of trivia I still am trying to compute and reach a conclusion about. My difficulty lies in how That Hamilton Woman is something of mixed bag. Stuck between wanting to be a historical romance and a propaganda piece that browbeats audiences into seeing parallels between Britain’s 19th century struggle against Napoleon and its 20th century conflict with Axis Germany, director Alexander Korda is forced to make several tough choices as he attempts to juggle these contrary agendas.
Some of Korda’s decisions are right. The film wisely stays away from trying to be a naval epic dependent on scale models floating in the back-lot pool thrashing each other to pieces (save for the final scene, depicting Trafalgar – and doing a fair job of it). It mostly focuses on Lady Emma Hamilton, the sometimes wife of the British ambassador to Naples, Emma’s husband (Sir William) and Nelson himself. A few other characters come and go (Nelson’s dour wife among them), but the drama here is the love triangle, and it is rightfully given most of the screen time.
What is missing is some meaningful depiction of context and passion between the three leads, two of which are stoic enough to be considered statuary.
The Napoleonic wars are explained by Sir William Hamilton casually spinning a globe in his study, pointing to countries as if what is happening is little more than a game of Risk (and maybe it was to such aristocrats?). Shipboard life in Royal Navy is entirely absent from the film, as is Nelson’s and Emma’s courtship via letters, many of which survive to this day and could have been quoted in voiceovers. The complicated political interests of the major European powers, Napoleon’s successes and failures (and what they meant to people in Europe other than Napoleon) are conspicuously jettisoned in favor of an England is “good” and Napoleon is “bad” motif – a position my prejudices allow me to accept, only the manner of spoon-feeding here is so blatant and obvious that I found myself irritated with it.
The British people of 1941 (when the film was released) – to say nothing of contemporary audiences – probably are not interested in a history lesson, but a little less talking and a little more "showing" would have gone a long way in a film that often feels like a stage play with cameras turned on (balconies and bedrooms, a friend once quipped about this film, referring to the setting of many of the scenes).
As if this were not enough, we have Laurence Olivier as Nelson.
Like everyone else, I suppose I respect Olivier as an actor because it is conventional to do so, but I cannot help but feel that his performances grow more bizarre the further history advances from them. In all the pictures I have seen with him, he seems completely unaware that movies are more than plays being captured on film and screen-acting is more than bellowing out lines in as clear and pronounced an educated British accent as possible. Here I am forced to remind myself that overacting – or stage-acting – was vogue in the 1940s. Or was it? This film was released the same year Citizen Kane was, and there simply is no comparing the performance of the male lead in that picture to Olivier’s in That Hamilton Woman. They are worlds apart – and not in any way that reflects well on Olivier.
In addition to his questionable overall method, Olivier just completely misplayed Nelson, too.
The real Nelson was a vainglorious man who decided early in life to be a hero (he wrote this in his own journal) and methodically plotted how to make this happen. Along the way, he was insubordinate to commanders, disdainful of aristocracy (even as he yearned to join it) and routinely irritated that his genius was never properly recognized by his royal betters. He often referred to himself in the third person, was prone to ridiculous hyperbole (this is why he is so quotable) and had a notoriously short temper. At the same time, he was brave beyond belief, his loyalty to his comrades knew no bounds and the care and attention he paid to his subordinates was both genuine and heartfelt. He was instinctually patriotic and believed in service to King and Country, honor, dignity and doing one's duty -- no matter the cost.

In short, Nelson was a narcissistic and complicated person who nonetheless was a peerless leader with a tactical brilliance and an ability to inspire those around him. This made him an incredible military commander, a man other men would gladly die for. When Nelson himself died, common sailors who spent years before the mast, the hard men who survived on menial diets of beef and rum and were constantly beaten or threatened with beatings, cried like babies – and the vast majority of them had never even glanced at Nelson, let alone spoken to him.
I mention this only to illustrate how strange it is to watch Olivier creep through That Hamilton Woman like a hunchback who is afraid what other people will think of his deformities (Nelson loses an arm and an eye, off-screen). Neither Nelson’s vanity, which persisted even after his injuries, nor his lust for battle is ever on display. Indeed, Oliver paints the admiral as a kind of reluctant warrior, one pulled from his plow kikcing and screaming (the real Nelson lived for fighting). Olivier’s Nelson is a kind of Phantom of the Opera, in that we could easily imagine him more at home in dungeon, making music for his ears alone. And this important for more than historical accuracy’s sake. . . 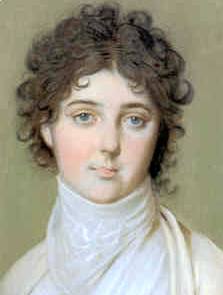 The real Emma Hamilton was a prima donna (in every sense of the word) who fell in love with Nelson precisely because he was a hero and behaved like one. She could have had almost any man she wanted, but she chose Nelson because he was famous, he wore a bedazzled uniform everywhere he went (his appearance compared by some to a “peacock”) and generally was the life of whatever party he attended (though he was never a dilettante). In the film, it is somewhat impossible to fathom why Vivien Leigh’s Emma Hamilton falls in love with Oliver’s stoic and shy Nelson. Their courtship feels convenient and distinctly cool and passionless. That is a problem for any film aspiring to romance, and it is an even bigger problem for a picture asking its audience to accept the premise that the couple is pursuing their affair at the risk of everything they hold dear.

I have been told, however, that I missed what is indeed a tempestous courtship by mistakenly looking for real people where there are only actors.

Along this line of thinking, Leigh's Hamilton is clearly locked in a marriage devoid of anything but wealth, and when she meets Nelson he is young and handsome, with boy-like charm and a commanding position in the Navy. She's intrigued and hot in her hoop skirt for him, and he's a long way away from a depressing wife who is looking after an even more depressing father. Distance plays a part (indeed, Nelson is famous for quipping that every man is a bachelor once he rounds Gibralter), but the affair really hinges on circumstance, availability and the obvious opportunity (for both Emma and Nelson) to engage in some passion completely unavailable to them in their other lives.

This is the film's beating heart and you either buy it -- or you don't...
Still, for all these gripes, there is something charming about the movie. It has grandeur – cold sometimes, but grand nonetheless – that seems to have evaporated from contemporary romance pictures, focused on today’s “everyman” and “everywoman” as they are. I suspect the grandeur works precisely because it is true-to-life and not the invention of the screenwriter. There is nothing worse than the invented princess; although ignoble by birth, Nelson and Emma were as close to the proverbial fairytale as anything else history has to offer. That the pair are swept up in world-changing events greater than themselves also stands in stark contrast to today’s romances on screen, wherein the main conflicts center around much more mundane exterior conflicts (will his/her parent’s like me?).
In the end, Leigh’s boisterous and energetic performance more than makes up for Olivier’s odd sulking, and the script is competent and clever in all the right places, despite its intentional limitations and book-report feel. When watching this, one is often overcome with the "they don't make 'em like they used to" nostalgia. And there is nothing wrong with that. Movies are supposed to make people happy, aren't they?
Posted by SKW at 8:00 PM