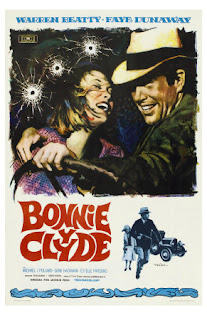 The first few minutes of Bonnie and Clyde are pure erotica.
We see a woman’s nude body, several close-ups of her mouth and eyes and a tantalizing shot of her full figure that almost reveals her entire breasts. The object of all this titillation is a well-dressed man standing beneath her windowsill. This man later asserts that he is “no lover boy,” which is his polite way of telling the woman he is impotent.

Unable to conquer her sexually, the man pulls from his pocket and shows her a revolver – that she curiously touches, of course – and then robs a store while she stands across the street and watches. In between this frankly sexual beginning and the film’s infamous and spasmodic ending, the misadventures of the two title characters dances to the tune of their awkward foreplay, exploring an attraction that can only be realized through robbery, murder and the everlasting thrills and boredom of being on the run from the law.
Clyde (Warren Beatty) is only able to consummate his lust for his gun-moll girlfriend and partner-in-crime when she reads him a poem she published about their exploits in the newspaper. Certain for the first time in his life that some part of him is immortal, Clyde overcomes his impotence and makes love to Bonnie (Faye Dunaway) in a blossoming field.
Of all the reasons dangled in front of the audience for the pair’s crime spree, it is the sexual imperative and the filmmaker’s deliberate attempt to link that imperative to uneasiness about death that feels the most compelling. More specifically, Bonnie and Clyde are characters hankering for some kind of immortality that will forever enshrine the way they feel about each other, and in doing so, give greater meaning to what are essentially nothing more extraordinary than impulses and attraction (the idea of “love” is never really mentioned by either partner).
When Clyde promises/warns Bonnie that if she comes with him on the road she will never have a moment of peace, he is saying exactly what she wants to hear. Bonnie’s life has been full of peace and she has no more use for it. On an even deeper level, both her and Clyde come to enjoy being on the run because whenever they are motionlessness, the relative stability of the moment forces them to stop and consider who they are and what will become of them. Such existential questions are, of course, primitive versions of the ultimate question about death – what death is and what death really means.
Neither Bonnie, nor Clyde is particular proud of themselves and where they come from. Throughout the film, they exhibit an enormous amount of self-awareness the other members of their gang seem completely incapable of. This is why the gang-members become concerned when they realize their robbery spree is not netting the group that much cash. In contrast, Bonnie and Clyde do not really care. For them, it is about the act of robbing – their form of sexual consummation and release – and the subsequent notoriety that results from their ill-thought antics.
This is not to say moments of doubt do not creep into their minds.
There is a sequence in the middle of the film when Bonnie yearns to see her mother and convinces Clyde to take her home. During the visit, she picnics with her family and plays with toddlers in a sequence of scenes filmed in otherworldly hues. This is a life not available to Bonnie, and although part of her pines for it, the film has already shown us how the ordinariness of life in a rural town drove her into Clyde’s gang, and her later attempts at making plans for the future do not feel like anything more tangible than foolish daydreams. In other words, she takes as much satisfaction from the publication of her poetry as Clyde does in knowing he has been immortalized. She, too, wants to live forever.
Invariably, like the act of love itself, a film built around passion ends violently and suddenly.

Bonnie and Clyde perish in a hail of bullets that shocked audiences when the film was first released in 1967. Living on the other side of films such as Natural Born Killers – to say nothing of just about every other empty-headed, orgy if violence Quentin Tarantino had a hand in creating – it is no longer possible for audiences to flinch in the places Bonnie and Clyde’s filmmaker wanted. This is not the fault of the filmmakers, of course, but much of the other unevenness that plagues the film can be laid at their feet.
The main problem with trying to enjoy this film lies in not knowing how to feel about it. There is real purpose and passion in some of the scenes, while others unfold listlessly with something that stinks of apathy. Pauline Kael thinks veering between these two divergent emotions is intentional, in that the harsh juxtaposition is meant to shock and unbalance audiences used to traditional narratives unfolding in typical fashion. I think it is just bad movie-making.
There is truth in the claim that the famous pair often come across as bumblers in this film.

Clyde’s first murder, for example, is an accident and his response is more suited for spilled milk. Perhaps that was the filmmaker’s intent, but it does not do justice the philosophical depth that occurs in other portions of the picture (I am willing to accept that Bonnie and Clyde are childlike but having them behave as children ruins portions of the film). The simple and unreflective nature of most of the brutality present here is also difficult to pin down, intellectually-speaking. For most of the action Dunaway, whose performance is something to behold, prowls or pouts her way through scenes like an angry and caged animal. Beatty just grins his toothy grin.
This curious lack of synchronization between the leads hurts the overall product (I say curious because in several scenes the duo's interactions are absolutely perfect). But whatever its specific defects, this is a bold and imaginative film that ventures into dangerous and interesting psychological territory and comes away with some serious and disturbing ideas. Is some delusion of mortality really all anyone is after when they meet a special someone else? Or is it only the pyschologically damaged who cannot let go of their own existential dread and enjoy the simpler things? And finally, do we all have someone we would rob banks for/with?
Posted by SKW at 7:21 AM