Life Among the Ruins

Film noir thrillers come and go, but not many seem as wonderfully bleak and overtly stylish as Carol Reed's The Third Man. 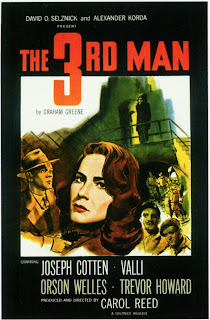 Part spy thriller, part mystery, this 1949 film delves deeply into the ugly side of humanity among the bombed-out grandeur of post-War Vienna and concludes that people can easily become grotesque and contorted versions of themselves if they are forced to exist in a rotten enough environment.
Indeed, the symbiosis between the film’s characters and its urban setting is both powerful and confusing. At no point are we certain if the people are altering the environment with their actions or allowing the environment to dictate their behavior – or some subtle combination of the two. What is clear is that Vienna operates in this picture as a kind of canvas, on which only the worst elements of humanity can thrive and excel.
A masterpiece of black and white photography, nearly every shot in this film is composed with striking angles and acute shapes, many of which are presented in a neo-expressionist fashion that recalls the intentional geometry of classic silent films like The Cabinet of Dr. Caligari, seen below here. 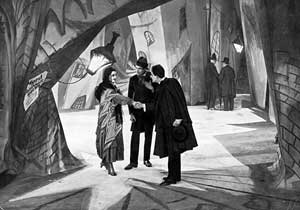 The result is an empty and moody Vienna, one in which everything is warped and distorted and nothing at all is anything like safe and ordinary-looking. 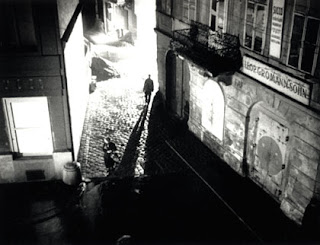 The city also functions as a Pandora’s Box for protagonist Holly Martins (Joseph Cotton), who arrives fresh-faced from America in search of a job with his old friend Harry Lime. When Martins learns Lime was struck by an automobile and killed just before his arrival, he suspects foul play. That he is naïve and incapable of comprehending the actual depravity associated with Lime’s death is masterfully illustrated through Martins’s interactions with Major Calloway, the British MP who investigated the fatal accident. Calloway forthrightly tells Martins to quit nosing around the Lime case and leave Vienna: “You don't know what you're mixing in,” Calloway chides.

Clearly, Martins is the stereotypical American who is not quite ready to deal in the harsh brutalities present in the larger world. When he finally learns the truth about Lime and what he has been up to in Vienna, he is shocked at the inhumanity of it all. Calloway, who has swum in these troubled waters before, is not.

By the film's end, Martins is more like Calloway, in that he becomes a compromised character willing to trade other people in the name of a ultimate end. In this Vienna, nothing else seems possible. The only difference in the people is the end they are aiming for -- everyone is using everyone else as a means for something, and in this environment friendship and fidelity are quickly sacrificed to expediency. Anna, Lime's one-time girlfriend is the only character who remains loyal, and at the end of the picture, she is a lonely figure, doomed to be re-patriated by the Soviets. Her loyalty bought her nothing, a result which forces the audience to ask if she might have been better off joining in the game of compromises, too. 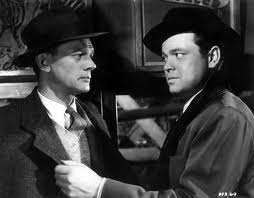 This form cynical realism is further reinforced when Orson Welles (Lime) finally appears on-screen. Absent for most of the picture, the wait for Welles is well worth it. Not only does he outshine all of his cohorts, he also delivers the most important lines in the film. The speech given on the Ferris Wheel is rightly famous as one of the most sinister pieces of dialogue ever committed to film. What it lacks in moral sentiment, it makes up for with diabolical and coldly pragmatic logic:
“Victims?” Lime says, when Martins alludes to people who suffered from Lime’s tampering with morphine. “Don't be melodramatic. Tell me. Would you really feel any pity if one of those dots (the people on the ground below them) stopped moving forever? If I offered you twenty thousand pounds for every dot that stopped, would you really, old man, tell me to keep my money? Or would you calculate how many dots you could afford to spare?”
Lime then lashes out against governments, claiming this is how they treat people, so why should he not do the same thing? Considering that we have seen the British and Soviets trading people like poker chips in the film (and are aware, as an audience, that the Cold War looms on the picture’s historical horizon), the argument feels powerful in its initial gusto.

What it lacks, however, is any moral consideration of perspective and intent. The black market – itself a distorted and unnatural part of capitalism – has thoroughly corrupted Lime by compelling him to limit his vision and actions to a sole actor – himself. Thus, Lime ends up alone, and after being chased through a sewer, he is killed by his oldest friend. That he becomes one of his own dots is the film's ultimate irony: The ominous and foreboding circular motion of the Ferris Wheel is complete. 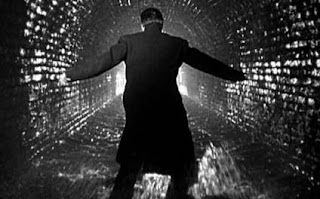 However much he had it coming, Lime’s death still leaves us confused and unfulfilled, in that it feels like there is no justice or retribution present in the act (certainly Martins’ face seems confused about what the execution means). This is because the demise plays as little more than a sum to the equation Lime set in motion himself. The  confusion is simply testament to the film’s power to muddle morality, to stretch it and distort it and filter it through this post-war Vienna’s troubled prism. It is also a subtle verification to many of the uncomfortable ironies that makeup the history of civilization. Or as Lime puts it:
“You know what the fellow said – in Italy, for thirty years under the Borgias, they had warfare, terror, murder and bloodshed, but they produced Michelangelo, Leonardo da Vinci and the Renaissance. In Switzerland, they had brotherly love, they had five hundred years of democracy and peace – and what did that produce? The cuckoo clock.”
Posted by SKW at 7:52 AM