Together, They are Better People

The African Queen is a perfect example of the sort of finely tuned moviemaking that seems to have virtually disappeared from Hollywood these days. Made with just the right amounts of romance, adventure and humor, the film manages not only to defy classification, but also please just about every conceivable demographic of viewers in the process. 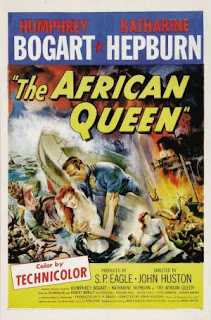 Although it is well-regarded, what seems to have been missed in all the adulation the film attracts is the very mature way in which it depicts love as a kind of expert social partnering, in which the man and the woman rise to new heights because of the attributes and demands of the other. Without this, the film could almost be ordinary.
The whole of the 1951 picture stands much taller than its constituent parts thanks to timeless performances from screen legends Humphrey Bogart and Katharine Hepburn. People who like to talk about inspired casting should watch this movie. 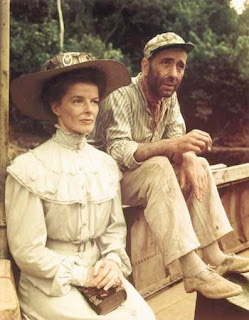 According to John Huston, the film’s director, the warm comedy we see on-screen was completely absent in both the C. S. Forester novel and the script derived from it. Rather, the humor radiated naturally from Bogart and Hepburn, who got along so famously they could not keep their playful banter in their trailers and off the film’s set. For this, we should thank them. Forester’s novel is a grim and rather straightforward enterprise, and like much of his work, it possesses a kind of juvenile flair that does not make a good foundation for portraying courtship in anything like believable terms.
Chemistry is a word often thrown at the feet of romantic duos in movies, but this is what it looks and feels like when it is present in a picture – and genuinely felt by the requisite actors – and not the paid creation of a studio publicist or the whimsical invention of a movie critic. Bogart, in particular, is worthy of praise. 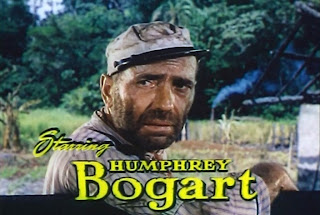 His performance as gin-soaked riverboat captain who begins the proceedings with a nearly toxic combination of loose morals and low education is a host of delightful contradictions throughout. Allowed to play with a range of emotions unavailable to him in other films, he shrugs off his usual debonair self and deftly displays a pleasant mixture of strength and vulnerability, intelligence and naiveté, and stoicism and sweetness – sometimes even in the same scenes.
Hepburn is her usual intelligent and whippet-like self, gradually bending but not breaking to Bogart’s charms until just the right moment. I have always liked the way she draws out her sentences as if she is not sure what conclusion they will reach, and here it serves her character’s brazen – but ultimately forgivable – machinations toward her opposite.
The action of the film centers on the outbreak of the First World War in 1914 and the nascent threat the Germans could pose to British interests in Africa. When Hepburn, a British Methodist missionary intent on bringing Jesus to the Dark Continent, loses her brother to a German war party, her soul fills with righteous patriotism and singular purpose: She will exact her revenge by destroying the Louisa, a German steamer that controls a nearby lake. Unfortunately for her, to achieve her aim, she must convince Bogart, an agnostic and rather unpatriotic Canadian, to risk life and limb – not to mention his boat, the tiny African Queen -- for distant King and Country.
While these details are important, as an audience we are more invested in what is happening between Bogart and Hepburn and we follow their journey down the dangerous river and toward their inevitable confrontation with Germans because we want to see what happens to them as a couple much more than we want to see the Louisa sunk.
Love contains a great many things, but one of the most important is that the couple should augment each other in such a way that they bring out the best of the other. Films often fail to depict this facet of love, largely because writers and directors are more interested in exploring the power of attraction and the contrived drama that surrounds courtship. And while The African Queen certainly depicts attraction and courtship, it would fail to be a great film if it stopped there. 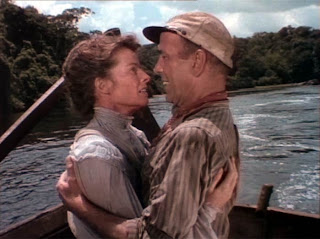 Bogart thaws the puritanical block of ice that is Hepburn’s missionary with his earnestness and worldly commonsense, while she civilizes his character’s coarseness and convinces him to believe in noble purposes and act selflessly. Separately, both begin the film on opposite poles of the human spectrum. Through their flirtation and courtship, they converge together in the middle, where both are happier and inherently more human. By the time they embrace as man and wife at the end, they are better people precisely because of their relationship with each other. This is ultimately what makes the film so charming: We witness the growth of two people into one better person.
Posted by SKW at 1:38 PM