Nobody Falls in Love Anymore…

Or at least, not on screen they do.


We live in the age of insufferable romantic comedies, wherein aesthetically pleasing actors and actresses engage in childish antics as they annoy their way toward some kind of emotional and physical connection. Is it love these contemporary celluloid couples finally arrive at after their gaudy comedy of errors careens to a distinctly unremarkable conclusion? Somehow, I doubt it.

This is not to say we expect to go to romantic comedies today and see something completely original.


The cagey among us know there have been too many films, too many plotlines and pickup lines exhausted for that. Indeed, I am not even certain we want originality from this genre. Rather, like the true and tested lover in our lives (or the one we yearn to find), I believe we want our romantic comedies to skillfully repackage everything we know from past experiences in a way that continues to tickle the better bones in our body. But we also want to watch two people actually fall in love. I mean, that is the point, right?
Unfortunately, nobody falls in love in the movies anymore. That something like a hangover or a rot has eroded the genre’s former standards is fairly obvious, if you look for it. The people we watch in movies nowadays meet and hookup. For how long? Who can say? To find two people who appear to be falling in love on film one has to go back to classics like 1934’s It Happened One Night. It is not an easy journey, because there are so many clichés one must get on the other side of, but it is a trip well worth taking. 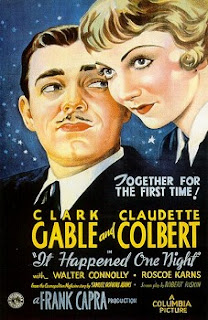 To be sure, there is something overtly artificial in Frank Capra’s classic about a rich girl who runs away from an unhappy marriage and finds true love in the form of coarse and underclass reporter, but the fantasy behind this setup is much more palatable than the ridiculousness that all too often accompanies the Cinderella-story knockoffs we are forced to endure in today’s theaters. Capra was a skilled craftsman of the highest order, one who knew how to portray human sentiment without sliding down the slope and landing in the land of sentimentality.
In the hands of less talented actors, the relationship between the leads might have devolved into farce, too. But It Happened One Night boasts Clark Gable and Claudette Colbert, both of whom took home little gold statues for performances more than worthy of the accolade. Gable, in particular, is impressive in the way he mixes grandeur and desperation to craft a wholly believable ruffian who stereotypically harbors a hidden idealism built on pride and good will towards his fellow man. That we accept him and accept the almost insane premise that throws the two into each other’s lives is entirely down to the undeniable authenticity of  the pair's interactions. And they are helped in this task by a script that is alive with wit. 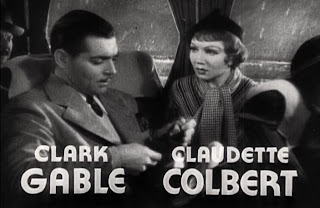 You see, people fall in love – real love, not lust or infatuation – by talking to one another. There must be a certain level of shared understanding, a certain level of what I will call deftness and presentation – and, of course, infectious flirtation.  Without a delicate and case-specific combination of all of these, the spark between two people never truly turns to fire. And before you think I have forgotten about the film under review here, let me hasten to point out that It Happened One Night captures exactly what men and women say to another when they are engaged in the benign combat that begins love.
I will make no predictable claims about films being “better” back then. I will only say that writers had to work, in that they had to rhetorically walk around much of the crudeness that pervades – some would say perverts – the romantic comedy genre today. As Sam Wasson said, “wit was the best (and only) way to talk about sex” back then and so we are privy to remarkable conversations that dance around obvious attractions and even better metaphors concerning attraction’s end result.

Consider how Gable drapes blankets over a string to separate the couple at night. He blithely calls this the Walls of Jericho. Later, of course, these walls come down. An even more famous scene has Colbert showing a leg to stop a car. The act is hardly noteworthy today, but back then it was both scandalous and sweet, and in terms of the film’s plot, it helps convince Gable that the girl he is falling for really does have some spirit in her. My mind boggles at trying to imagine what a contemporary director would have to come up with to achieve the same effect. 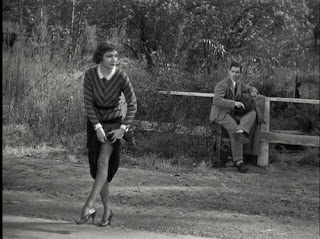 The romantic comedy is dead – or beeping away faintly on life support – these days precisely because the whimsical subtlety and misdirection that makes flirting with a potential significant other so much fun is largely absent. There is goofy hilarity to be sure, but the actors today are not talking to each other the way Gable and Colbert did. And because of that lack of precision in the scripts, the contemporary equivalent of catching a glimpse of that special someone’s leg no longer matters all that much...
Posted by SKW at 9:21 PM