If there is such a thing as a submarine film genre, Run Silent, Run Deep invented it.


The 1958 thriller starring Clark Gable and Burt Lancaster as a pair of World War Two naval officers trying to survive each other’s opposing viewpoints during a cruise in the Pacific is a virtual fountain of all the standard material one finds in nearly every undersea adventure: The tense monotony of the sonar pings, the men staring earnestly at gages or listening to propeller screws in headphones and, of course, the Captain shouting “Clear the bridge – Dive! Dive!” 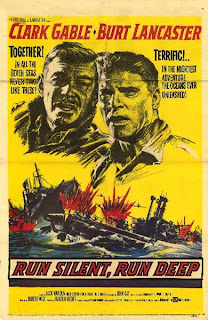 All of which is a roundabout way of saying that this film, chock full of what would eventually become clichés, very easily could have drifted into awfulness and ended up a mediocre ancestor of bigger and better movies. The fact Run Silent, Run Deep remains irresistibly entertaining and watchable, the fact it more than stands up to the test of time and the very obvious advances in photography and special effects – consider that not one frame of the film was shot underwater – rests on great acting and a smart script that deftly invigorates a rather formulaic plot.
Gable’s performance as a commander who yearns for a chance to revenge himself on the Japanese destroyer that sunk his sub is particularly impressive. There is nothing debonair or effusive here from the man who at one time was called The King of Hollywood. Gable’s portrayal of P.J. Richardson as a desperate man full of grit and silent fury is as pitch perfect as Lancaster’s solemn and stentorian turn as Lieutenant Jim Bledsoe. That the two men are set against each other – Richardson convinced the Navy Board to give him command of the submarine destined for Bledsoe – and then gradually reconciled during the film’s action might be predictable, but it is great fun to watch. 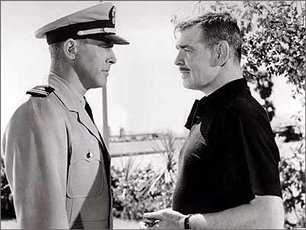 Richardson’s pursuit of the Japanese destroyer is inevitably compared by critics to Ahab’s maniacal pursuit of the whale in Melville’s Moby Dick. Richardson is certainly as single-minded as Ahab. At one point in the film, he barks he “never even thought of failing.” At another he warns his near-mutinous first officer that “this boat has one – and only one – Captain.”

But for all this passion, Richardson eventually realizes when he has gone too far and he allows his ambitions to cool, both of which are distinctly un-Ahab-like. Additionally, Richardson gets his “whale” when Bledsoe allows him to give the order that ultimately sends the Japanese submarine to the bottom of the ocean. Ahab’s chase did not end quite as well.


At just a little more than one and half hours long, this is a taut film that wastes no time on the unnecessary. The script swims along at a wonderful pace that never leaves the viewer dulled or displeased. That it manages to do so without the over-reliance on technology later submarine films would suffer from is a credit to this film’s innovative movie-making and powerful storytelling.

While Run Silent, Run Deep is not destined for dissection in film school, it remains a solid piece of drama that more than outshines similar efforts in more recent years. Put simply, they do not make them like this anymore – and that is a damn shame, if you ask me.
Posted by SKW at 10:15 PM