Sometimes, it is difficult to watch classic films and recognize what made them classic. Other times, it is just impossible. The distance from the release date is too great, the world too different.

Three Days of the Condor, a Sidney Pollack film starring Robert Redford is routinely referred to as a classic spy thriller – or, at the very least, a pretty good example of the conspiracy-driven films that bubbled up in the mid to late 1970s. The problem is these kinds of films do not affect contemporary film-goers the way they did their original audiences: It is no longer shocking, for example, to learn that the government lies and sometimes does things it should not (see All the President’s Men).

For my money, films like Three Days of the Condor work better as indicators of an era – examples of mindsets and of attitudes, etc. – than as pieces of timeless drama. That is not to say the constituent parts of this film are not any good. The direction and acting here are superb and the film should work – and therefore age – better than it does. Exactly why it falters rests on the not-so-subtle message I believe the filmmakers wanted to impart to audiences. 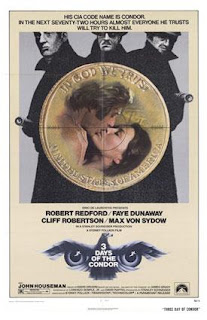 When we first meet Redford, a man well known for his off-screen messaging, he is a CIA open source analyst in New York who scours books written in foreign languages looking for patterns or ideas. It is not exactly exciting stuff, until he goes to get lunch one day and comes back to find all of his colleagues dead. When he calls Langley to try to figure out what happened, Langley sends someone to kill him. Redford then adopts the tried and true movie and television-mantra of trust no one and stay on the move until you figure out just what the heck is happening (the Jason Bourne franchise did precisely this for three films).

Along the way, Redford picks up Faye Dunaway, the woman destined by the script to find his newfound vulnerability strangely enduring. It would be unfair to criticize Dunaway for this. She brings real emotive power to her scenes, even if nearly all of them are completely unnecessary to the plot. Her performance manages to grab hold of just the right amount of denial and acceptance in her interactions with Redford – and she can also be funny, such as when she jokes about being a “spy fucker,” a line I took as a sharp jab at the arm-candy that is ever-present in other spy films.

That line, however, is about irreverent as the film gets.

The majority of the time is spent in an earnest game of dodge-the-assassin. And the buildup concerning the mystery about what Redford knows, why his colleagues were killed and exactly who it is who may be trying to kill him – maybe there is a CIA within the CIA, he muses – is all done with serious and skillful vigor. Unfortunately, the tension inherent in these questions never really goes anywhere. Worse, we never can feel like Redford is in any danger. He is unquestionably the cleverest person on the screen, and despite being an analyst who read books for a living, he manages to sidestep all of the deadly operatives sent after him.

Whatever promise the film contains evaporates in the final 15 minutes, wherein instead of the revelatory finale we have been building toward, we are given a rather prosaic confession in a mahogany study – and can anyone really say for certain what the confessed “plot” really was? – and the film’s hitherto lethal antagonist gives up his aggression toward Redford, thanks to a new financial arrangement with CIA that the film’s creators probably reckoned was both original and disturbingly amoral. They are completely wrong on the first account, but closer on the second. The assassin’s steely description his dedication to a code of non-allegiance that rests entirely on caring only for his own professional exactitude as a killer is indeed chilling.

But it is Redford’s code we are supposed to care about, and so far as I can tell, he really does not have one. His transformation from the type of man who would join the Central Intelligence Agency in the late 60s or early 70s (the climax of Vietnam anyone?) to someone who would go to the New York Times to expose Agency wrongdoing does not feel legitimate.

The phony transformation is perhaps most clear when Redford, who almost appears to have quit acting in the final scenes of the film and inserted his actual personality and politics into the picture, loudly voices his disdain for the Agency by calling its employees “you people” – a sophomoric rebuke that conveniently forgets, of course, that his character is indeed one of those “people,” too.

Pollack and Redford would both go on to make better films that said more interesting things in less obvious ways. But even if we set aside the obvious politicking, the film struggles to work within its own genre, thanks to a few too many unbelievable scenes, a bizarre and unnecessary love story and a plot that never really fulfills its promise. A fair criticism, which I believe can almost be said about any 70s genre picture, is that Three Days of the Condor is essentially a terrific B-movie elevated by an A-list cast.
Posted by SKW at 2:36 PM