I had high hopes for To Have and Have Not.
The 1944 film was based on a Hemingway novel – a mediocre novel, but a Hemingway novel nonetheless – and it was directed by Howard Hawks, the man responsible for classics such as Scarface, The Big Sleep and El Dorado. With William Faulkner contributing to the screenplay and the oft-repeated behind-the-scenes legend that stars Humphrey Bogart and Lauren Bacall fell in love while making this movie, how could the film be anything other than cinematic dynamite, sizzling at the fuse? 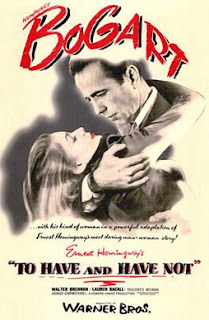 Unfortunately, in spite of all of the aforementioned big names, To Have and Have Not fails to deliver in multiple categories – charm being perhaps the most important one. Essentially, what we get is a confusing kind of best-effort from a lot of creative people who decided to remake another Bogart film that truly is a classic – Casablanca.
To Have and Have Not’s failure begins – but by no means ends – with its curious script, in which the novel’s tale about a desperate man who turns to gunrunning is completely jettisoned in favor of an incomprehensible intrigue revolving around a handful of Frenchmen resisting the whims of Vichy France on the Island of Martinique. As if this obvious plot point were not enough to ram home the resemblance the studio was shooing for, many of the film’s set pieces take place inside a bar that if you squint your eyes could almost be as effortlessly cool as “Rick’s Café.” When everybody isn’t drinking and smoking and looking for the strangely absent roulette wheel, there is a great deal of official-sounding talk about having the proper papers and about fighting for the “cause.” And occasionally, a German stool pigeon shows up – played rather deftly by Dan Seymour – and makes trouble for everyone.
It is tough to criticize Bogart for walking and talking like Rick Blaine, even though he does this throughout To Have and Have Not. Having seen Bogart as Harry Morgan in this film, Bogart as Blaine in Casablanca and Bogart as Philip Marlowe in The Big Sleep in a span of about two weeks, I would be lying if I could point to any difference in his performances. Bogart always plays himself, and I am okay with that. He has an incredible on-screen presence and the fact his devil-may-care coolness has never been equaled is more than enough to forgive him whatever other faults he may have as a performer.
Bacall’s performance in To Have and Have Not is more difficult to classify.
Certainly, she does enough here to justify the superstardom that would eventually follow, and she more than matches Bogart in their scenes – itself no mean feat, considering this was her first film and she was the screen-legend’s junior by more than 20 years. As for the legendary Bogart/Bacall chemistry, it is clear the two get along in this picture, but I am not sure anything extraordinary happens. 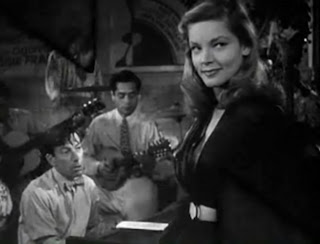 My failure to find the duo’s fabled chemistry could also have something to do with the obviousness with which Bacall is parachuted into this film. That is, unlike Ingrid Bergman’s character in Casablanca, Bacall’s really has no reason for sauntering into Bogart’s watering-hole in To Have and Have Not. Furthermore, once she has landed in the middle of the film’s opaque plot, the writers keep her there without ever really inventing a compelling reason for doing so.
That everyone else also seems to be going through the motions a little too well is very evident at the film’s conclusion, when there is no great climax to the plot’s muted conflict, no great sacrifice demanded of its hero and no promise that anyone in this fictional world is any different from having survived the depicted events. In other words, it does not end with the triumphal flare and tragic wonderfulness of Casablanca. That wouldn’t be a problem, except Casablanca is the film everyone here is supposed to be trying to ape.
Of course, the reasonableness of trying to reproduce the Casablanca magic just two years after its release is the silent, unanswered question that looms over the entirety of To Have and Have Not. I cannot fathom why anyone ever attempted such a fool’s errand, and if this film teaches us anything, it is that you cannot remake a classic – no matter how gifted a troop of talent you assemble.
Posted by SKW at 8:16 PM