The trio of films John Wayne made with legendary director John Ford about the U.S. Calvary in the late 19 th century’s Indian Wars are an odd mix. Unofficially, the three pictures are lumped together as Ford’s “Calvary Trilogy,” but there is little continuity between the individual offerings beyond the setting and the general themes the plots grapple with.
Indeed, watching them back-to-back can confuse. Ford utilizes the same stable of actors in all three efforts, only he inexplicably changes the character’s names and sometimes shifts their roles. For example, in one film a Ben Johnson is a sergeant and a trusted scout, while in another he is a fresh recruit with a penchant for fast riding. So while Johnson’s horsemanship remains constant, his role in the plot is considerably different.
But trying to reason why Ford recycled plots and shifted actors is wasting energy that is much better spent on what shines through all three efforts. These films are unabashedly patriotic, but they stop well short of jingoism. They are apolitical in the sense that the messiness of what the Indian Wars represent – especially to more contemporary audiences – is never specifically addressed. What is left when all the other ingredients have been boiled away is the complicated essence of masculine duty – a topic not many movies can claim to tackle, especially nowadays when masculinity is almost held in contempt. And Wayne, the quintessential male American archetype, with his wide-legged walk and his languid drawl, is the perfect actor to explore this concept. 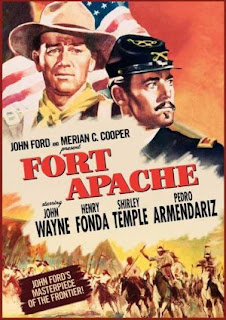 In Fort Apache, the first of the three films, Wayne portrays a highly respected combat commander forced to serve under a vain and mildly unscrupulous martinet, played with excellent aplomb by Henry Fonda. The critical conflict is the clash of wills between Wayne and Fonda. Will the former follow the orders of the latter – or will he rebel and lash out? Made long before the 1960s counterculture refashioned American virtue so that shirking authority became a noble enterprise, Wayne spends most of this picture biting his tongue and saluting. The only time he lashes out is when Fonda accuses him of being a coward. A man must accept professional abuse, no matter how misguided, but he is not restrained from responding to a personal attack on his character.
The film’s best moments have nothing to do with the Wayne/Fonda conflict at all.
More specifically, a great deal of this film unfolds like a novel of manners, in that we are shown how the society of the Calvary functions and what is and what is not permitted. Our main vehicle for this is the courtship of Fonda’s daughter by a young lieutenant whose family background is most decidedly lower class (the courter’s father is the trilogy’s ubiquitous and loveable drunken sergeant). The scene in which Fonda must, in his own eyes, humiliate himself by dancing with the boy’s mother is racked with visual tension that recalls the sensations produced by Edith Warton’s best prose.
Fonda’s eventual comeuppance occurs via the inevitable sting of battle. Like Custer, Fonda underestimates his enemy and refuses to listen to his subordinates around him. The result is equally disastrous as what happened in real life at the Little Bighorn, only in Ford’s film the one saving grace seems to Wayne’s fidelity to his commander – despite his commander’s obvious stupidity. There is something of the “The Charge of the Light Brigade” in all of this, but unlike Tennyson's poem, Ford is not interested in the sacrifice the men who died in vain made. Instead, Wayne’s decision to continue serve – no matter what the cost – is what stands out.

Some rather un-Ford like cynicism even creeps into the end of the picture when Wayne chooses not to refute a newspaperman’s virtual deification of Fonda’s foolishness. Wayne remains focused on his service, and in this regard, seems to operate under the presumption that the truth will not ultimately enable his attempt to fulfill his duty. This is a dangerous maxim to put forward, of course, but in Ford’s hands, it feels more thought-provoking than the “my country right or wrong” phrase that found new life as America descended into Vietnam. 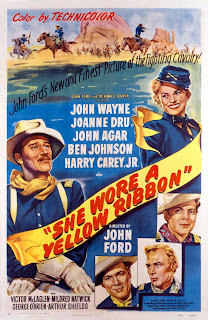 The nuance and characterization that made Fort Apache so interesting are largely absent in She Wore a Yellow Ribbon, Ford’s second cavalry film. The only one of the three shot in color, this film jettisons the Fonda character and then largely repeats the same plot without him. The main difference is that Wayne is virtually in command this time and he is tested not by another officer, but by events beyond his control (an Indian uprising). Charged with being the guardian for this desolate outpost of civilization, Wayne’s duty is to protect his troop and the White settlers who depend on them for their very existence. However, at the same time, Wayne knows being officer and gentleman means more than just being following orders, and with this in mind, he attempts to fulfill his duty, satisfy his morals and deal as fairly as possible with the Indian aggressors.
Wayne cleverly avoids an all-out war with the Indians by stealing their horses – itself ironic, given the Old West stereotype that Indians are horse thieves. What Ford wants his audience to understand is that the warrior who finds a way not to fight is every bit as glamorous as the one who charges to certain death. In this sense, the end of She Wore a Yellow Ribbon intentionally unfolds in exactly the opposite fashion of Fort Apache’s ill-fated climax. And unlike Fonda, who is one dimensional and stubborn, Wayne is presented as the complete officer. His solution to the Indian threat protects the American interests he oversees and avoids bloodshed at the same time. 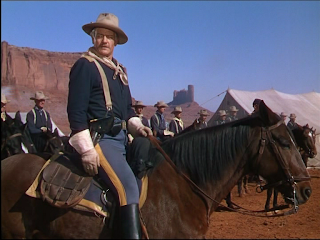 This near-perfect ending matches nicely with the film’s booming Technicolor vistas, but it somehow feels less tangible than the ugly truths we were forced to swallow in Fort Apache’s dénouement. Perhaps, having experience cynicism in the trilogy’s first outing, I was unprepared for Ford’s return to his more typical brand of optimism? 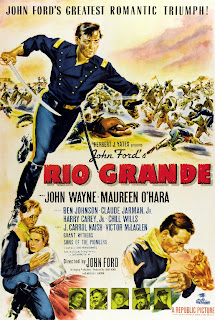 Rio Grande, the third and final film, is hailed by some as Ford’s not-so-subtle comment on the Korean War. Personally, I think that is something of a stretch. However, this is the only film in which the Indians are presented in evil terms. Wayne also makes what he ultimately judges as mistakes, only to erase his errors – in reality, judgment calls based on incomplete information – with a triumphant charge into an Indian camp.
Along the way, there is great deal of singing and some of the novel of manners approach explored with such success in Fort Apache returns in the form of Wayne courting Maureen O’Hare, who plays his sassy and ready-for-divorce Southern wife. Wayne’s and O’Hare’s son is also present in the cavalry troop, with Wayne blustering he will not display even an ounce of special treatment toward his offspring. Unfortunately, for all the attempted fireworks, the estranged couple’s interplay never goes anywhere, and as delightful as O’Hare is, we end up feeling like she is there simply because the plot calls for it. Wayne’s son fails to torment him as much as he could, either.
As I already suggested, unlike the previous two films, where the Calvary blunders into a battle it need not fight or avoids unwanted bloodshed through Wayne’s clever plan to steal horses, Rio Grande sees the U.S. soldiers engaged in a moral battle against Indians who have lapsed into cross-border banditry and inexplicably decided to kidnap white children. In the finale, Wayne and his men ride into a village and assault a bevy of Indian warriors who are literally staggeringly drunk on firewater. The children are recovered, the Indians vanquished and back at the Post, O’Hare is suddenly smitten with her wounded husband. All is well that ends well, I suppose, but there is not much drama in what happens here, and given the heights of previous offerings, Rio Bravo ranks as the trilogy’s biggest disappointment.
That Ford clearly decided to make less complicated films after Fort Apache should not surprise. The entire reason he made the trilogy in the first place was to generate enough cash for his studio so he could make The Quiet Man. Accordingly, there is some truth in the argument that this trilogy is formulaic and designed to sell tickets. But to dismiss these films as nothing more than a means to an end would be a massive mistake.

For starters, we owe Ford a debt of gratitude for dragging the Western out of the Hollywood back-lots and allowing it to breath in the open American air. Monument Valley, where all three films are shot, is a wondrously cinematic, full of barbaric rock formations and dramatic desolation. Without the valley’s austerity, Ford’s clinical exploration of masculinity would fail to impress as much as it does and the sheer danger of the land America’s pioneers were forced to contend with would remain a mystery to filmgoers.
The actual notion of masculine duty itself has also probably never been given a more thorough treatment than it has in these three pictures, either. By setting politics completely aside and taking his audiences back to a time and place that most have forgot, Ford successfully illustrates the notions of service and heroism. These were men on the edge of the world, and regardless what history would say about them today, they were serving an ideal and safeguarding a way of life in incredibly dangerous and inhospitable places. Being reminded of such service from time to time cannot be a bad thing…
Posted by SKW at 9:51 PM