Like climatic battles between two titanic empires, romantic comedies are damn near run things that fail or succeed by the scantest of margins. Miscalculate the levity, make a poor casting choice or choose an inappropriate setting and any effort in this genre can easily become ridiculous, sappy, unfunny – or worst of all, irritating. 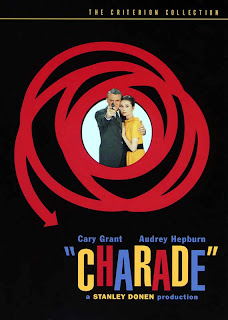 Thankfully, the convergence of skill and craftsmanship behind Charade make it almost impossible to dislike. The 1963 film boasts a talented cast led by Cary Grant and Audrey Hepburn, a delightful score and a spy game stratagem that unfolds with exactly the right mixture of playful shenanigans and baited-breath. There is nothing approaching greatness in this movie, but whoever goes looking for greatness in romantic comedies is bound to be disappointed. Fun, formatted with typical cleverness, is more what we are after – and we get to have quite a lot of fun in this semi-serious romp of a picture.

Unfortunately, I suppose some of the tongue-in-cheek that makes Charade such a hoot is lost on the contemporary viewer. Released at virtually the height of the Cold War, a time when both the local cinema and the living room television are alive with spy stories, Charade’s not-so-hidden agenda is levity in the face of overwhelming dread. That director Stanley Donen succeeds so well in satirizing the easily recognizable tropes of the spy genre and the thriller is a testament to precisely how well he understands both. Labeled the “best” Hitchcock film never made by Hitchcock, Charade’s audience is continually asked to follow a film that looks and feels like the great British master’s work right up until the punch lines materialize and burst whatever self-important bubbles were forming.
Joel and Ethan Coen achieved something close to this in 2008’s Burn After Reading, but the Coen duet do not have Donen’s appreciation for the musical rhythms of humor. Donen, the director of the seminal Singin’ in the Rain, knows more about moving humans around the set, and as a result, set-pieces such as the funeral scene in which Hepburn watches in amazement as a parade of oddball characters parade before her eyes unfold with a dizzying feeling of frolic almost completely devoid in the Coen satire.
Elsewhere, the mood remains far too light, the plot far too much what-you-see-is-what-you-get for it ever to really be mistaken for Hitchcock, but even so, there are certainly some Hitchcock-ian flourishes on display.  Chief among them, of course, is the fact that the plot revolves around the innocent bystander (Hepburn) who unwillingly becomes immersed in a complicated espionage plot – a setup Hitchcock utilized several different times, each to great effect. The other touch that made me think of Hitch comes when Grant faces down one of the film’s villains on the roof of the hotel where much of the principle action occurs. Part Rear Window, part North by Northwest, the scene unfolds in a wonderful series of lattice-like shadows cast by a neon sign. The roof’s gradual slope to death-by-falling is both obvious and suspenseful at the same time, and the choreography leading up to the inevitable is staged as masterfully as anything Hitchcock did. Other moments, such as the opening at the ski resort, are funnier when viewed from the historical aftermath of the numerous snow scenes in the James Bond franchise we have all loved and endured for more than four decades. And I doubt there is anything more perfect than the gun pointed at Hepburn in the film’s opening few shots.
The timely murder of Hepburn’s husband saves her from agonizing about divorcing him in favor of Grant (who she meets at aforementioned ski resort). The death also launches the film’s action, as we quickly learn the husband was involved in some kind of espionage or criminality plot. What follows is a largely a comedy of errors, in which Hepburn muddles and giggles her way through several acts of spying and a few attempts on her life. Through it all, Grant is conveniently at her side, dashing and indecipherable until virtually the last frame of the film, when his true nature is finally revealed. Even more interestingly, the film takes great pains to chide Grant for being far too old for the petite and always elfin Ms. Hepburn. Grant, who turned the lead in Roman Holiday several years earlier precisely because of the age difference between the two, supposedly insisted the script contain the jokes – and they work precisely because one of Grant’s strengths has always been self-depreciation. 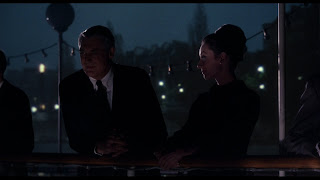 Everyone involved probably made better pictures, but as a B-side to the rest of their careers, this is not too far off in sheer quality. I enjoyed this film for what it is and throughout felt a twinge of nostalgia and sadness, largely because contemporary attempts to recreate the chemistry that works so well in Charade now seems beyond Hollywood. The occasional moments of slowness – the script, I think, could have been tightened 15 minutes – does not detract from the final product’s overall punch. This is a fun movie, made by skilled people who know how to entertain audiences.
Posted by SKW at 6:44 PM