Sean Connery and Michael Caine could do just about anything on film and it would be interesting to watch. Titans of a very different sort, both infuse any picture they are in with the intense gravity that accompanies their commanding presence. In 1975’s The Man Who Would be King, both romp through the exoticism of the East in a film based on a Rudyard Kipling short story about two swindlers intent on conning an entire nation into letting them take over as rulers. 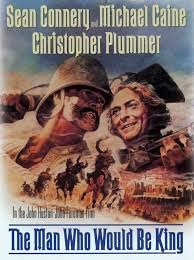 Often labeled, erroneously I think, as rip-roaring piece of criticism about empire, this is a film in which a pair of larger-than-life stars explore the notions of ego and ultimately end up celebrating it. How is that for British irony? Along the way, honor (amongst thieves and otherwise), greed and the corrupting influence of power are also explored, but in the film’s final few frames, Caine, haunted and clearly mad, remains both proud and passionate about what he and Connery achieved through self-motivation and their own guile. 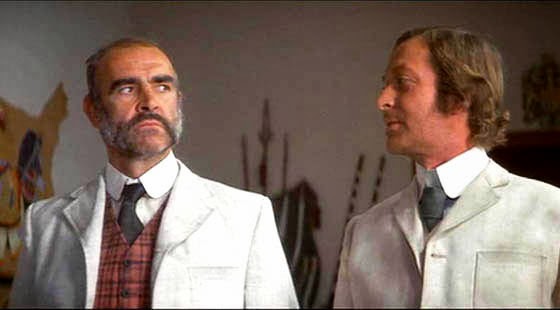 That the two men who perhaps more than any other actors who symbolize British masculinity are cast back to the 19th century to play rakes and conmen is a genius bit of casting that reveals precisely where the film plans to take the audience:  Away from safe and academic topics and toward the dark recesses of what can drive men to questionable acts. Early on in the film, for example, Caine unleashes a powerful invective against the British bureaucracy in India. It is an impassioned speech, but not a word of it is accurate. What Caine and his companion are suffering from is far more generalized, in that it is not red tape they bristle at, but the very law and order that is inherent in civilization. The pair are, in other words, two of Sigmund Freud’s bored “discontents,” chafing from the proscription of the boundless desires their rather large egos have created.

In other sense, these men are also adventurers, and as such, their sense of scale dwarfs the ordinary man’s. They want to leave India and head beyond Afghanistan and Hindu Kush because men of their ambition need “space.” Or as Connery puts it “We’re not little men.” To ease their abrasions, the two devise a wild scheme, wherein they will help a feudal king in Kafiristan overcome his enemies, then depose the king and assume his authority themselves. To aid in their proposal, the pair acquire 20 British rifles and a cache of ammunition, and off they set.

As I have suggested, these are men of appetite, large appetite. And there is something to admire in the way they go about trying to satiate themselves, but there is also something shallow and sad about it, neither of which was lost on Kipling. Connery and Caine’s ambitions often manifest in incredibly prosaic ways. What Connery wants, for example, more than anything else is to be received by the Queen of England as an equal and then made a member of the Order of the Garter, which contradictorily, would again make him a servant of Her Britannic Majesty. This is a commoner’s, boyish dream – and Kipling meant for us to recognize it as such and chuckle at it. 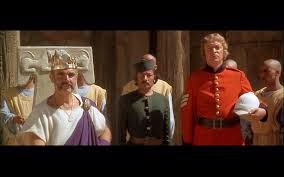 At about the same time the events in this film take place, Lord Acton famously proclaimed “Power tends to corrupt, and absolute power corrupts absolutely.” There is nothing terribly new in the supposition that power is a corrupting agent, but the power itself is not really the corruptor. It is the ego that sought the power in the first place. The triumph of Caine and Connery that follows is thus a testament not to a cravenness for power, but to their vision and audacity. 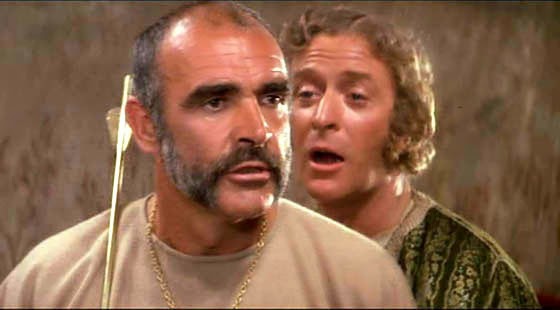 Of course such bold ambition place in the service of self-serving needs cannot be allowed to stand as successful in either literature or film. And thus, the fall comes to Caine and Connery as it does to all misguided and ignoble protagonists. Having installed themselves as rulers and begin pilfering the riches of Kafiristan, Connery cannot resist actually ruling, and ruling as a God no less. Caine attempts to bring his friend back to reality, but to no avail. Connery has truly been ultimately corrupted by the grandiosity of their heist.

The even more incredible irony at work here is the fact that if Connery had kept to the contract – an obvious metaphor for Western temperance – he and Caine devised and minded the part about leaving the native women alone, he would have been able to fulfill their plan (IE -- Loot the riches and flee back over the Hindu Kush). Here, man’s inability to live inhumanly as a God is personified in Connery’s inability to forget Roxanne’s beauty, but more than that, he wants a wife, a family and a child – all of which are very unlike deity-like desires, something the priests quickly call attention to. If there is any ultimate conclusion, it is that audacious swindlers who concoct almighty swindles are still swindlers. They just have larger imaginations than their small-time counterparts. In the end, the goal of both is the same, overturn the traditional order by taking something from someone else to satisfy the rather childish parts of the ego. (Another irony is that wanting to marry and begin a family is the most adult ambition Connery displays throughout the film and it is ultimately his undoing.)

This is not to say Connery and Caine are petty. Their oversized appetite saves them from that fate.

When, for example, they are facing what they believe is certain death early in the film, Caine and Connery are buoyantly resigned to ending their time on Earth, knowing full well that they have lived life in a way few other men have for no other reason than they had the guts to do it. “How many men have been where we’ve been and seen what we’ve seen?” Caine asks. “Bloody few,” Connery pipes back.


Indeed, these are not little men, and we should celebrate them for that. Although the tale is ultimately cautionary, it remains something of a paean to ego. The tragedy as I see it is not that Caine and Connery had these personalities, it is that they were not able to discover anything in their Victorian world that they believed their considerable energies should be dedicated toward. They had, in essence, nothing but themselves and their own desires. Which is the same as almost having nothing.
Posted by SKW at 6:39 PM