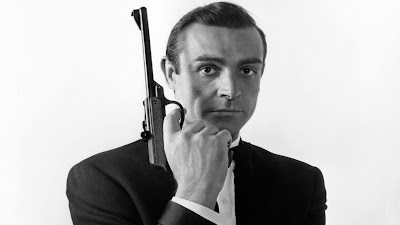 To be a voyeur, to peak at a private world not your own is a fundamental part of reading a book or going to see a movie or play. As a reader or an audience member, you are, for a time, permitted to survey that which is typically hidden from you during your everyday life. The only way you can learn about actual people as much as you learn about characters in fiction is by spying on them. Perhaps this is why spies and their genre films have such a visceral pull for audiences. Add sex, lies and state secrets to the essential urge people have for observation and understanding and you have a potent mix for highly emotional drama, in which the best and worst of human nature competes for stakes that are both fantastic and accessible.
Detective stories and the Westerns dominated the early days of film, but tension surrounding two world wars gave legs to a new kind of genre film: The spy film, which began with Fritz Lang’s Spies in 1928, came into its own during the 1930s when Alfred Hitchcock began to make a number of films concerning what many call the world’s second oldest profession. The slew of combat dramas produced by the Second World War were ill-suited for the Colder, much more difficult to understand conflict that followed in its wake. The spy film became the only vehicle to explore the complex, deadly and worldwide game between NATO and the Warsaw Pact.
But for all these grand notions of chronicling an era, the best spy films have always heavily relied on depicting some aspect of the emotional drudgery that accompanies the business itself. Like politics, spying is both awful and noble at the same time. It involves lying, manipulation and exploitation. It also serves the cause of truth – and fewer holier aims exist. As such, the best spy films are the ones in which an important unknown is chased by band of flawed individuals, each trying to get the best of the other.
Sounds a lot like life, doesn’t it?
1. The Spy Who Came in From the Cold
It is not often a great novel becomes a great film, but John le Carre’s classic tome is translated near-perfectly onto the screen in this 1965 film. Richard Burton plays British spy Alec Leamas, a cynical and hardened Cold Warrior who has just seen his entire network of operatives uncovered and executed by the East German Stasi. Sent home in disgrace, Leamas is quickly recruited for one last mission, one in which he is promised revenge against the German responsible for the death of his network. Leamas agrees and allows himself to be recruited by the other side in order to sow confusion there, but unknown to both him and the audience, a larger, more sinister game is being played and Leamas is nothing more than a pawn.
Shot in black-and-white, the film oozes atmosphere and functions almost as a film noir. The famous twist at the end, along with Leamas’s resigned decision to quit trying and “come in from the cold,” are unforeseen and haunting, as is Leamas’s dark assessment of his profession and its dehumanizing elements: “What do you think spies are? They are a bunch of seedy squalid bastards like me, little drunkards, queers, henpecked husbands ...” Not to be missed.
2. Notorious
Hitchcock probably made more spy films than any other director. His best is 1946’s Notorious, one of his less well-known efforts. It is a beautiful picture, filmed in elegant settings with glamorous people. But set amongst this splendor is a gritty tale of espionage that captures the complicated relationship between a spy (Cary Grant) and his agent (Ingrid Bergman) better than any other film. Throughout, Grant coldly takes advantage of Bergman’s alcoholism and neuroses in order to get her to spy on an old boyfriend, a man associating with Nazis in Argentina who are up to no good.
When the boyfriend (Claude Rains) proposes marriage to Bergman, Grant ignores his own feelings for her and pushes her into the arrangement, knowing it will enable her to feed him better information. The strain of a double-life – faking love and using sex to gain access to secrets – is delicately and expertly portrayed by Bergman. There are several wonderful sequences in the movie and an incredible amount of tension, but it is unabashed realism of Grant and Bergman’s partnership that stands out.
3. The Third Man
Not a straightforward spy film, but spies and espionage abound in this moody expose of post-war Vienna that explores the darkest extremes of human tendencies. Joseph Cotton plays a man who is summoned to work with a friend in the city and arrives to find him dead. Exactly what this friend did for a living and how he died are both shrouded in mystery. All of the people Cotton encounters in this distorted version of Vienna are more than what they initially seem and none of them want him to look too closely at what has happened. Beautifully filmed with a haunting soundtrack an incredible cameo by Orson Welles, this tale is chock full of seediness, intrigue and double-dealing, but we remember it ultimately for what it has to say about human nature and the lies people often tell themselves to excuse the things they do. For a full review of the film, click
here.

4. From Russia with Love
James Bond films do not depict espionage well. Bond is much too extroverted and his methods far too clumsy and action-oriented for real spooks, but not having an entry from perhaps the most famous spy in the world would make for a pretty poor list. Although it is not my favorite Bond, 1963’s From Russia with Love is certainly the best, in terms of plot and actual espionage. Free from the special effects, gadgets and spectacularly absurd antagonists that came to dominate the franchise (as well as make it so easy to parody), this outing sees 007 lured into a Cold War mission to acquire a code-machine under false pretenses.
In reality, the international terrorist group SPECTRE is dangling the machine in order to bring Bond into the open so the organization’s assassin can kill him. Along the way, 007 navigates through the nest of intrigue that is post-war Istanbul and encounters a KGB-trained honey pot sent to seduce him with the charms of her considerable body. It all ends in a delicious cat-and-mouse game between Bond and his assailant, an excellent chase scene and a frightening attack from a hag with a knife hidden in her shoe. Who could ask for more, really?
5. Where Eagles Dare
Another Richard Burton outing, this one supposedly filmed so his son could enjoy a “boy’s adventure” film about the War. As far as that goes, this 1968 effort does not disappoint. The 2 ½ hour running time sprints by, thanks to a delightful cacophony of quirky dialogue intermixed heavy doses of intrigue and machine gun fire, most of which is provided by a certain Clint Eastwood. The plot centers on a mission to rescue an American General being held captive in a mountain fortress by Nazis, but this is little more than a springboard for the whirlwind that follows.
Given the high body count and action-oriented climax, some would call this a straight war film, but I am sticking with the spy genre. Burton’s real purpose for storming the aforementioned castle is to pull off a complex counterintelligence coup, only half of which makes sense the first time it is revealed. The end of the film sets the stage for more Burton/Eastwood sequels. My heart cries that none were made, although perhaps it is for the best. What we have here is pretty damn entertaining – and as I already suggested, it is not all lowbrow stuff, either. One of my favorite films, even if I know I should not revel in its simple complexity as much as I do. This is Indiana Jones meets James Bond and it is nearly perfect.
Posted by SKW at 5:58 AM