Typically, science fiction is poorly written pulp, prone to fits of juvenilia based on curious beings from beyond, ray guns and intergalactic damsels in need of rescuing. But in the late 1940s and early 1950s, science fiction literature began to change. Writers such as Isaac Asimov, Ray Bradbury and Robert Heinlein started producing novels and stories that pushed the genre’s boyish traditions into the hitherto largely unexplored realms of moral philosophy, politics and theology. 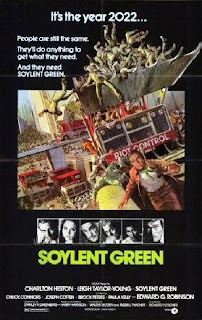 It took science fiction films a few years to catch up with the novels, but when they did, some fantastic – albeit somewhat clumsy and obvious – pictures began to appear that dealt with serious subject matters. Soylent Green is a prime example of this kind of issue-conscious filmmaking.
The 1973 picture starring Charlton Heston and Edward G. Robinson remains interesting and relevant, largely because it is a fine example of how well science fiction can work when filmmakers care more about ideas than special effects. Devoid of oversized robots, light sabers and starships, the audience is forced to focus on the simple discomforts inherent in an overcrowded and crumbling New York in 2022. Heston and Robinson are policemen and roommates who spend most of their day fretting about keeping their jobs and the rest of it trying to secure their part of the world’s dwindling food and water. 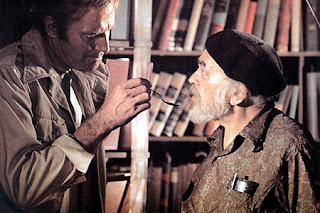 For kicks, the aging Robinson (appearing here in his last film) rides a stationary bicycle that generates power for their cramped apartment.
Outside, people lay down to sleep wherever they can find a flat surface and everyone seems to work for the state or subsist on its welfare. Nobody treats anyone else with anything like humanity, and as Robinson complains, “nobody seems to care about anything” and “nothing works … not really.” The resignation everyone displays in the film toward this dystopian world is both overpowering and disheartening. Rather than fight for any kind of change, it is easier to try and get what you can. Even Heston, the policeman, is corrupt, and he jumps at the chance early on to loot a murder victim’s home for food and luxuries.
As for the aforementioned food shortage, handouts come in the form of Soy-based food substitutes served up from the limited farmland beyond the city’s ruined urban landscape. Soylent Green, the newest eco-friendly substitute, is supposedly made from plankton. Robinson remembers when “food was food” and people did not have to eat “tasteless, odorless crud” designed by what he calls scientific magicians, but nobody else seems to. 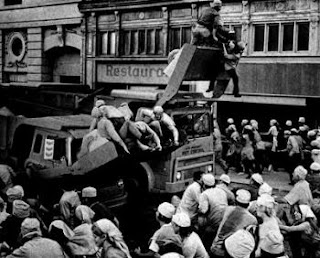 I have written before about the difficulty of approaching classic films with a fresh palate. Soylent Green is a perfect example of just how impossible this can be sometimes, as most of us, in some form or another, have seen or heard about the ending of the film, wherein an enraged Heston – and so many of his roles do end in outrage – yells out the terrible discovery the picture builds toward. Only, as a result of our previous exposure, the truth is not really terrible or shocking.

That it takes cannibalism -- a timeless taboo -- to unsettle Heston is in some ways far more revealing about what is happening in the world this picture has created. Heston is prepared to accept just about everything else the audience finds disturbing. Indeed, at some points, such as the riot, he is an active participant in what repulses us. But humans as food? That's out of bounds.


Fortunately, our foreknowledge of this -- the film's hidden truth -- is useful. Knowing the secret allows us the luxury of watching the picture with a heightened sense of disquiet, and as a result, scenes such as the one where a food riot occurs take on added meaning. And while there is some truth in the notion that Soylent Green is a “movie based on an ending,” there is also enough happening on screen here to warrant continued attention from audiences.

We live in an apathetic age full of processed food. That we have some distance to go before we reach the world of Soylent Green is scant comfort when one considers how prophetic parts of this picture still seem. It is a warning, albeit a crude one, and we should all take note.
Posted by SKW at 5:05 AM