The Complicated Bounty of Mythmaking

We never seem to tire of stories about the 18th century ship known as the Bounty.
Sent in 1789 to Tahiti to transplant the breadfruit tree to the Caribbean, the crew mutinied against Captain William Bligh three weeks into the return journey and set him and 18 others adrift in 23-foot boat in the middle of the Pacific Ocean. The Bounty and most of its crew then landed at Pitcairn Island and lived out their natural lives there. Bligh made an incredible 41-day journey to Timor and then returned to England. He went on to fight with Nelson, survived another mutiny in Australia and died with pomp and circumstance as an admiral. 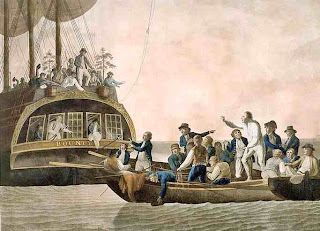 A man driven by professionalism and duty, Bligh would probably recoil if someone suggested during his lifetime that hundreds of years later his name would be synonymous with sadism and tyranny, and if the actual history of the Bounty’s mutiny is anything to go by, he would be within his rights to feel unjustly treated by the cabal of poets, authors and screenwriters who have chosen to elevate the plight of the ship’s mutineers at his expense. But dramatically speaking, Bligh never had a chance: Artists tend not to extol the virtues of authority and argue for its legitimacy.
Caroline Alexander wrote an excellent book dispelling many of the erroneous Bounty myths that have come down to us, including the fiction that Bligh was a heartless dictator, but the splash her lively and detailed scholarship made is nowhere near powerful enough to undo hundreds of years of ripe retellings and exaggerations. Sea stories are typically better when they are not true, but on this occasion, as anyone who has read her books knows, straying from the facts has coarsened the tale and made it less remarkable. Bligh’s open boat voyage is typically given short shrift, as is the incredible tale of the British ship that returned to Tahiti to round up some of the mutineers. What we are left with, then, is a rather exotic tale of good and evil, of one man’s tyranny (Bligh) and another man’s political descent into open rebellion (Fletcher Christian, Bligh’s 2nd in command). There is, at this point, a healthy body of literature repeating this dichotomy and at least five films that do the same.
Among this impressive corpus is the curiously uneven 1962 film starring Trevor Howard as Bligh and Marlon Brando as Christian. 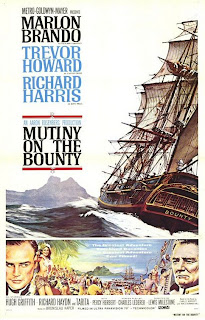 The role seems a natural one for Brando, who at this point in his career is still young and dangerous-looking and full of the kind of combustible energy that worked so well when directors pitted him against some sort of authority – oppressive or otherwise. The only problem here is that Brando is horribly miscast in the Christian role and he fails to deliver most of his lines with anything like the craftsmanship we expect from an actor of his caliber. A great deal of the problem lies in the accent he inexplicably verbalizes. There is a well-known joke in England that the upper classes speak as though they have plums in their mouths. Somebody must have told Brando this, because he spends most of the picture with his head cocked slightly backward, his eyebrows aloft with a kind of bemused arch as he conjures words through his nose. 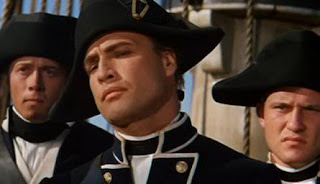 To make matters worse, both Brando and the script presents Christian as a rich dandy, bored with pretty much everything life has to offer. When he first reports for duty, he is dressed in a preposterous costume and he struts across the deck with two well-heeled strumpets on his arm. At one critical point in the film, he appears in foppish pajamas smoking a pipe befitting a hobbit. At another, he is seen traipsing around the deck sketching while the rest of the men go about the business of sailing a ship halfway round the world.

Pressed by Bligh about his motivation, Christian confesses he serves His Majesty’s navy only because the army was “too dusty” and “one must do something.” Bligh, who is presented as clearly not of this kind of landed gentry, eventually accuses Christian of thinking he is better than everyone else and being incapable of any emotion but contempt, both of which ring true and hardly make Christian the likeable leader of truth and right the film desperately wants us to think he is.
Although it is woefully inaccurate, Howard’s portrayal of Bligh is far more interesting.
In the film, the real Bligh’s foul mouth and puritanical leanings are jettisoned in favor of showing him as the living incarnation of corrupted authority. Command is lonely and personally unsatisfying and the ability to terrorize other men its only reward. Christian accuses Bligh of beating the men because he enjoys it, but as an audience, I am not sure we see any overt sadism. Rather, Bligh beats his men from a misguided sense of duty. “Cruelty with purpose is not cruelty,” he tells Christian, “it’s efficiency.” 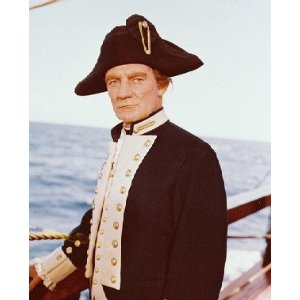 This chilling thought, which must run through the warped mind of every dictator who ever plagued his people, is further emboldened by the mistaken notion that the best way to entice men to achievement is through fear and intimidation. The irony, of course, is that Bligh finds the concept of fear so powerful because he himself is driven by it. The scene of Bligh surrounded by breadfruit trees in his cabin, mentally quaking at the thought of any one of them not living to see Jamaica, reveals that the Captain actually fears the Lords of the Admiralty, and that his mistaken notion of leadership is akin to passing this fear down the chain of command to the common hands (blame also works this way in this film, as Bligh never seems prepared to accept that he is ultimately responsible for his ship’s failures).
The catalyst that undoes the unhappy ship’s “efficiencies” is the island of Tahiti, which in every Bounty story is presented as a verdant paradise, full of beautiful and pliant women, plentiful food and, of course, a respite from scrubbing the deck with holystones or going aloft to trim sail. It is difficult for contemporary audiences to imagine what it must have been like to work day after day on a sailing vessel in cramped living conditions with bad food and harsh discipline. It is even harder to imagine what arrival at Tahiti must have been like, for today’s expensive island vacation destination was to the 18th century Englishmen probably akin to landing on the Moon, so different was Pacific tribal nation from everything he had ever known. 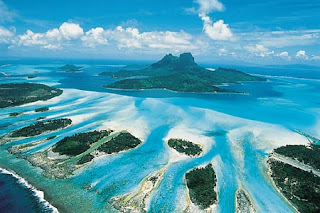 The exotic allure of Tahiti’s unusualness is captured quite well in Charles Nordhoff and James Norman Hall’s 1932 novel, but ignored almost entirely in this film. In its place, the complex dichotomy between conscription and freedom is explored more freely, as the sailors, led by a rebellious Richard Harris, begin to think unconsciously – and in crude terms – about their human rights.

There is something paradoxical and naive in the way all Bounty stories depict Tahiti as existing in a state of nature where the cruelty, violence and struggle for food and shelter conveniently do not exist. The trope of the noble savage is nothing new, of course, but I do not think it has ever been used more powerfully than in the Bounty stories, where the Europeans quite literally are entranced by an island culture at the same time they are abusing it and ruefully shaking their heads at its sheer backwardness.
Or maybe I am reading too much into all this? Remarking on how most of the Bounty men – save Bligh, of course – took wives and fathered children on Tahiti, a friend once quipped that the true theme of the Bounty stories is that men will do crazy things for love, which is really just a polite way of stating that men will do crazy things for sex.
Given this undeniable truth, what are we to make of the actual mutiny, then?
In the film, Christian claims he acted for honor. Later, he tries to compel the ship’s company to give up their notion of hiding on an uncharted Pacific island and return to England for the same reason. Given that honor is largely a personal matter, Christian’s role as emancipator seems complicated by these justifications and entreaties. Before he was put over the side, Bligh says “a little show of temper” is really what drove Christian to rebel – a point the novel also alludes to when it contends that Christian simply grew tired of being humiliated in front of the hands by his overbearing Captain. 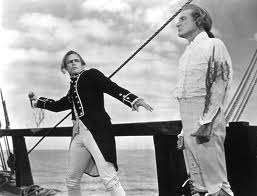 Establishing Christian’s motivation is all important, because by the end of the film we are supposed to view him as some kind of hero. His protracted death scene, which finally sees Brando fulfill his talent’s promise (even if his speech runs on too long), offers an appeal to principles that attempts to redeem the mutiny on moral grounds. However, it is clear the crewmen do not view the mutiny as such, and indeed seem scornful of Christian and reluctant to endorse his worldview.
Our understanding is further complicated by the fact that the real Fletcher Christian was murdered by other mutineers, a victim of the forces of chaos he unleashed. I am not sure what lesson that leaves us with, but it is something quite different than the film, in which Christian is strangely aloof for a good two hours and then excessively lionized for a few moments before he dies. The uncertainty of anarchy and the inability of the actual mutineers to leave their former prejudices behind when they attempt to setup their own island paradise is precisely why it fails, but this problematic ending is typically untouched in most Bounty re-tellings.
Strictly speaking, Mutiny on the Bounty remains an impressive film. Its monstrous budget, which included a life-size replica of the Bounty and scenes filmed in Tahiti, ensured it is visually one of the most exciting sea-faring epics ever produced. Still, for all its fine craftsmanship, this film fails to capture the power of the actual Bounty story. It is muddled in setup, fumbled in execution and uncertain of its ultimate message, and powerful performances from Howard and Harris cannot mask Brando’s off-key and bewildering turn as Fletcher Christian.