The Most Dangerous Thing

Like fire, truth is often a deadly and indiscriminate thing.
Difficult to control, once it is let loose it can burn the guilty and innocent alike, and in many cases, there is no stopping its warm proliferation until the thing itself gives up and dies on its own accord. These Pyrrhic attributes of truth, along with what people choose to do with it and how that decision impacts their lives, has never been depicted on film with as much accuracy, skill and gusto as in Elia Kazan's 1954 masterpiece On the Waterfront. 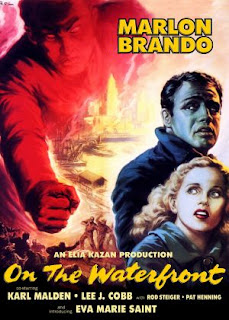 Set among organized crime and corruption in a New York dockworkers union, the film masterfully juggles the destructive and rejuvenatory power of truth by following the complicated odyssey of Terry Malloy, a washed-up boxer on the docks who is forced to deal with maze of complicated loyalties, conflicting emotions and moral choices that are all well beyond his intellectual and psychological means.
It is an interesting twist, in the sense that the contemporary audience member is more accustomed to watching Mafia pictures from the perspective of the Mob. In those films, the drama lies in witnessing the depravity of the criminal mind and in exploring the crime world's compromised system of morals. In contrast, this picture forces the viewer to confront the moral dilemmas faced by the Mob's victims, all of whom are workingclass and interested in little more than making a living, staying alive and hanging on to their dignity through a social code of silence ("deaf and dumb"). Malloy and his coworkers, in other words, are all nobodies, they are "bums" trying to survive on the scraps their criminal masters leave for them. It is a depressingly powerful calculation on Kazan's part -- one that works even better today, post-Godfather and post-Sopranos, than it did in the 1950s world of post-Cagney films.
Marlon Brando is rightfully praised for his performance as Malloy. Brando could have played this part as a primitive palooka, veering between tenacity and confusion throughout the picture, and probably still achieved Kazan’s goal. Instead, he boldly portrays Malloy as a former bully who wakes up after several years to discover he is just another peon among the bullied (despite his older brother's connections to the Mafia running the union). This change in circumstance has left Malloy glum and unsure of himself, all of which Brando masterfully evokes with his deliberately slow and confused speech, his gloomy – at times, almost clownish – face and his timid movements. 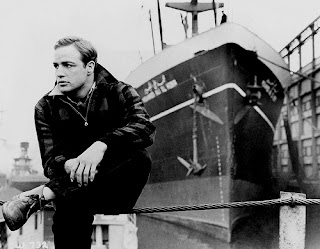 Malloy's troubles begin when he is used by Mob boss Johnny Friendly to lure another union employee who has been speaking to the police to his death. Malloy tries to forget the incident, but his conscience will not let him (he is also resents being used, which reminds him of his fallen status). His inability to put the murder behind him becomes even more problematic when he meets Edie, the sister of the dead man (played to perfection by Eva Saint Marie, in her debut role).
Forced by an inquisitive Edie, who finds the contradictions bubbling beneath his surface persona to be both attractive and dangerous, Malloy confesses his philosophy of life is nothing more complicated than “Do it to him before he does it to you.” Edie correctly identifies this as the law of the jungle and she tells Malloy he is “living like an animal.” Unable to deny it, Malloy tries to derail Eddie’s troubling enquiry with beer and dancing, but his Epicurean attempts are foiled by a Mafioso toughie telling him he has to meet with Johnny Friendly and policemen stuffing a subpoena into his hand. 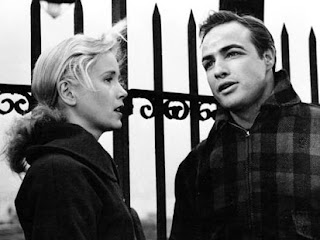 Like it or not, Malloy has to face his choices. He cannot pretend they will go away. He cannot play the Longshoreman way and be “deaf and dumb” the way he has in the past. Events have conspired to hand Malloy the dangerous flame of truth, and he can either speak the truth – letting it loose, damn the consequences – or bury it deep inside, where it will smolder and eventually immolate him.
Malloy's choice is further complicated by Father Barry (played powerfully by Karl Malden).

Following the death of Edie's brother, Barry has had enough of the local thuggery, and he makes it his mission to aid the helpless and expose the corruption present in the union. Barry makes a bombastic appeal to truth and righteousness after another man who comes forward is killed, arguing that those who do not speak up are as guilty of the Savior’s death as those in crowd who boisterously shouted at the Roman Govenor to free Barabbas instead of a certain Jewish preacher from Nazareth. This sort of lofty appeal is lost on most of the Longshoremen and seems contrived more for the audience than anything else. (There are persistent rumors that Kazan made this film as an apology for naming names in the infamous HUAC committee hearings on communists in Hollywood, but Kazan always denied this). 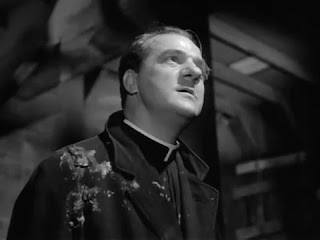 What finally stirs the union from their self-imposed slumber is the sight of Malloy fighting it out on the docks with Johnny Friendly. When Malloy beats Friendly, the unassailable thug loses his infallibility. The union's respect for him is further eroded when the Mafia boss simply calls on his minions to beat up Malloy because he cannot. This offends the men’s sense of dignity, and they subsequently transfer their respect from Friendly to Malloy, the latter of whom has proven with his body that he is a man of principle and not a rat. In these terms, it is hard to read Malloy climbing back to his feet and staggering toward his jobsite as anything other than a kind of crude resurrection.
However, Malloy's motives for standing against the status quo and speaking the truth -- in court and in his everyday life -- are not entirely moral. Not for nothing do the police investigating the union try to push Malloy's buttons by mentioning his former boxing career. They can see he is unhappy with his fallen status and hope to provoke him by reminding him what he might have been had he not gotten mixed up in the rackets. Malloy's plea that he could have been a "contender" is often cited -- and parodied -- as one of the great lines of dialogue in classic film, but the most moving moment in this expertly crafted scene, packed full of raw emotion, comes when Malloy realizes that his brother Charlie -- and specifically Charlie's close ties to the Mob -- are what has derailed his life and made him a "bum." 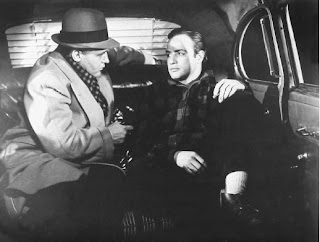 Charlie's betrayal and ruthless manipulation of his brother is further brought home by the fact Charlie actually considers killing Malloy in order to keep Friendly happy. "It was you Charlie," Malloy sighs, realizing how his much blame his brother shoulders, how alone he is in the world and how powerful the corruption he faces truly is (for Friendly has nearly succeeded in turning brother against brother). Later, Malloy will want revenge for what Friendly does to Charlie, but at that moment, his grief and his resignation to how ugly the world can be is palpable, and as an audience, we truly feel for him.


This is why when Malloy says “I ain’t a bum” in the early-going of the film, the line comes across as the petulant and defensive cry of a child who wants something to be true, even though he knows it is not. At first, an equally defensive and inexperienced Malloy does not know what to do with the truth, but once he warms to the notion of using it for good (both personal and impersonal good), he becomes more human and loses his haunted and unsure look. Yes, he takes a beating, and much of what he cherishes is destroyed (his brother, his pigeons), but when he gets back on his feet, he is -- for the first time since he started taking dives in the ring -- something other than a bum, and it is the truth that delivers him to this new existence.
Posted by SKW at 12:23 PM