A Love Affair with Black and White

I recently told a friend that I have come to appreciate film noirs above and beyond their peers in classic cinema. Pressed by this acquaintance for a definition that helped explain what was – and what was not – film noir, I found myself unable to articulate anything other than a disparate list of movie titles, which at first glance, had little in common ... other than lots of people smoking...
As it turns out, I am not the only who has trouble defining the genre.
Film critics, art historians and various other media types have argued about what film noir is and which films are considered examples of the genre for quite some time. I do not believe I can propose a solution to their disagreements here, but I can talk about some of the less controversial aspects of noir and explain why I love it so much.
The aesthetics of film noir are perhaps its most distinguishable feature. 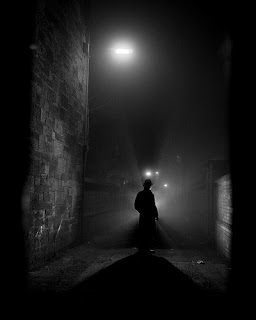 “When I think of film noir,” Paul Duncan writes, “I think of stillness and silence. I think of a pure black screen with tiny pinpricks of white trying to break through.” Film noirs tend to be black and white pictures made between 1940 and 1960, whose lighting was intentionally engineered to create contrasts as sharp as the moral entanglements present in the plots. I say tend to, because as Roman Polanski’s Chinatown illustrates, noir still had legs as late as the 1970s, and it works in color (for more recent examples of noir, keep reading).
Since we cannot rely entirely on time period and aesthetics, I propose the best way to identify noir is to pay attention to several common themes. More specifically, noir films are about trust and betrayal. Oftentimes, the protagonist is a male (private eye, cop, journalist, spy, criminal, etc.) and he must choose between two women – one beautiful and damned, the other plain and honest. The beautiful woman is the femme fatale, and like the mythological sirens of the ancient world, ruination lies at the end of paying her the slightest bit of attention.
Noirs delve deeply into the psychology of the characters. Nearly everyone in a noir film is obsessed with something (typically money, sex or power) and many times their egos, fears or weakness are the critical components the plot hinges on (see Jimmy’s Stewart behavior in Vertigo). Noirs also portray the disturbing chasms between the theory of society and its practice. These films are chock full of public corruption, perversions of authority and the endless struggle of the one man against a social construct, such as his family, his government or his environment.
Other times it is some facet of the America dream itself that is the film’s catalyst. Or as Ann Douglas puts it, “noir is premised on the audience’s need to see failure risked, courted, and sometimes won; the American dream becomes a nightmare, one strangely more seductive and euphoric than the optimism it repudiates… Noir provided losing with a mystique.”
Prominent examples (not to be missed) of the genre include:
Double Indemnity (Reviewed here)
Touch of Evil
The Third Man (Reviewed here)
The Big Sleep
The Maltese Falcon
Chinatown
Sunset Boulevard
And since we are talking about a genre as a whole, I feel it is okay to step outside the usual writ of this blog and offer some contemporary examples of film noir, too. The genre is alive and well, even if its best days may be behind it. My hope is that after watching a few of the more recent films (most of which I am sure people will have seen), readers will then go back to the true classics.

Basic Instinct – This controversial – some would say notorious – film is absolutely awash in noir elements. Michael Douglas’s policeman character must navigate a treacherous world of lies and half-truths and choose between believing the good woman in his life or the bad woman (and the film muddles which woman is which). Throughout, Douglas’s obsessive/compulsive character continues to make bad decisions for rational reasons, adding to the sense that his character (who is already under a cloud of suspicion for a fatal shooting) is doomed. Did I mention Sharon Stone? Forget what you may or may not see in that scene and recognize that her character is the perfect embodiment of more than 50 years of femme fatales.
Body Heat – This frank and lurid remake of Double Indemnity has more than enough original material to make it interesting, beginning with Kathleen Turner’s breakout performance as a woman bent on becoming rich the old fashioned way – by murdering someone. Body Heat is also a wonderful film to contrast to its source material, in that it works precisely because it has the kind of steamy sex scenes, remorseless violence and bawdy language unavailable to filmmakers in the 1940s. As a result, this film’s pair of doomed lovers is far more erotic and psychologically disturbed than their cinematic predecessors, even if they are less complicated and more obvious.
Heat – Many would argue this is more of a straightforward heist film, but all the conflicts present in Michael Mann’s tour de force hinge on noir themes. Pacino and De Niro are presented as doppelgangers whose professional expertise and personal identities largely depend on each other. That one is good (a policeman) the other bad (a bank robber) does not separate the men from each other as much as their roles would suggest. Indeed, the pair strikes up something of a friendship, even as they are incapable of making their other social relationships work. Ultimately, Heat is as pessimistic and fatalistic as any classic noir. All the characters are incapable of escaping the channel they have chosen to swim within and when bad things begin to happen to them, the script responds with the genre’s typical “so what” attitude.
L.A. Confidential – Trust and betrayal are at the heart of this sprawling epic about corruption in post-war Los Angeles. This is a film in which every character is more than what they initially seem, every character openly wants something and they all are willing to elevate expediency over morality in order to get it. Most films struggle to depict a single character’s moral dilemma, but in this movie, every character has a dilemma and the audience gleefully watches as the film toys with individual motivations and preferences, and then gradually forces them all to collide on screen. Kim Basinger’s contrarian take on the femme fatale won her Oscar.
Sin City – A fairly obvious choice. This is film noir storytelling filtered through the comic book genre and then adapted back to the screen with a healthy dose of hyperbole. Visually, the film’s partial-animation takes Duncan’s aforementioned pinprick dichotomy of black and white to a whole new level, as characters and settings are literally reduced to the most basic interplay between light and shadow. A brief examination of the plots in the film reads like a laundry list of noir tropes. Not to be missed for those capable of delighting in tongue-in-cheek moviemaking.

The Big Lebowski – How could this be included? A few years ago, I might have asked the same question. It took multiple viewings, all of which were enjoyable, before I finally began to figure this picture out. It is, I believe now, a quirky homage to – or perhaps even a parody of – noir classics like The Big Sleep. If you do not believe me, look at the title. If you still do not believe me, take a deep breath and then consider how the plot of Raymond Chandler’s masterpiece and the Coen brother’s movie can both be described thusly: An eccentric and wheelchair-bound man asks someone to track down a kidnap victim – only it turns out that this person really was never actually kidnapped in the first place. Now go and watch The Big Lebowski again, study its plot, taking note of its setting and its strange characters. Then consider how the action is filled with constant moral temptations and accept the movie as a new kind of noir, because that is what it is.
Posted by SKW at 2:27 PM