As far as first efforts go, one can hardly argue with Alfred Hitchcock's initial stateside film.

A dark and Gothic tale that clearly borders on the film noir, 1940's Rebecca would later be eclipsed by the great auteur's other, more richly imagined Hollywood efforts, but in terms of sheer craft and complexity, I rate this film as highly as any of Hitchcock's others. The only film from the great director that ever nabbed an Academy Award for best picture, Rebecca soars on the back of a remarkably tight script -- no scene or line of dialogue seems wasted here -- excellent cinematography and a pair of perfectly understated performances by Sir Laurence Olivier and Joan Fontaine. I confess I have not read the novel on which the film is based, but it would be difficult to imagine how it could equal the film's subtle portrayal of wickedness and possession, given that in certain scenes, Hitchcock paints the proverbial thousand words with merely the position of a shadow, the movement of the actors or the tone in which they speak. Atmosphere is everything in this film, and how could it not be? This is, after all, a film in which the title character who is the driver of the entire film's events is not even alive. Yes, you heard me correctly. Not even alive. 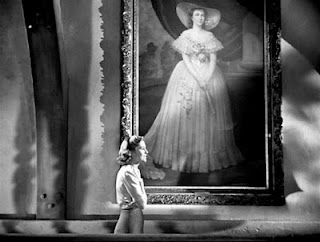 Nonetheless, "Rebecca," who is Olivier's deceased wife, has a power and allure whose attraction has outlived her death. Indeed, the film itself makes it clear that the hand of the dead can rest on the shoulders of the living, no matter how much the living wish it were otherwise. In Rebecca's case, the power stems almost entirely from perversion. Though she was known as a beautiful and successful socialite, Rebecca's inner self was dark, manipulative and cruel. Not only did she torment her husband, but the film makes it clear she toyed with several other lovers, to say nothing of people in general. Her chief ally in this comes in the form of Judith Anderson, who is not only the housekeeper on Olivier's estate, but also Rebecca's sole confidant. Anderson clearly enjoyed the games Rebecca played, and in her absence, she has devolved into a kind of priestess who worships at the memory of her former master. 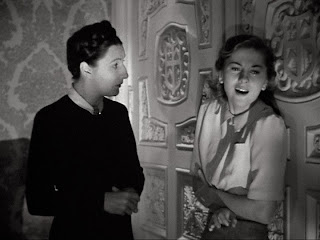 Accordingly, Anderson is forever dressed in black. She is rarely shown walking, and in most scenes moves about the frame more like an apparition or wraith than a human. Her devotion to Rebecca is clearly suggested as homosexual, but in a completely unrealized sense. Instead of love, we have co-dependency base on shared sociopathic tendencies that delighted in the manipulation and destruction of others. Rebecca -- the extroverted half -- needed an audience for her twisted triumphs, Anderson -- the introverted half -- needed a idol to follow and give her life meaning.

Such devotion, of course sets Anderson against Fontaine, Olivier's new wife. But more than that, Anderson is against Olivier, the last person to see Rebecca alive and the person whom Anderson correctly suspects of having something to do with Rebecca's death. Olivier, too, is hiding something and suffering from Rebecca's legacy. To free himself from Rebecca's trap he must both admit to himself what kind of person Rebecca was and acknowledge his role in first not stopping her and then in crudely confronting her and having an unwitting hand in her death (Olivier also believes he murdered an unborn child). 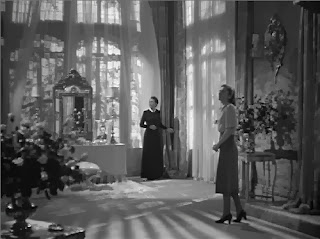 Fontaine, who arrives in Manderley with no understanding of the forces already at work there, must discover, along with the audience, who everyone is and what their role in the tragedy of Rebecca was. The interesting part of this is that every character has a piece of who Rebecca was, none of them have the whole. All of the characters are reluctant to share what they know and what they learn with one another, believing (correctly, as it turns out) that the whole of what they might assemble might not be something to linger in front of. And in fact when the pieces are finally put together for the audience to see, something frightening and wicked does appear.

Rebecca most certainly was a villain, but like most villains, she did not have to kill or behave crudely herself because there were plenty of people willing to either help her (Anderson) or abstain from stopping her until it was too late (Olivier). Manderley itself is haunted by the evil done there, and to show this Hitchcock brilliantly shoots the interior as if there is always water dancing on the walls, a direct reference to Rebecca's watery grave offshore, and to the fact that everyone remains waterlogged by what she left behind. Olivier and Fontaine must perpetuate the lies in order to seal their own marriage. Manderley itself cannot be saved and it burns to cleanse away what happened there (fire being the opposite of water). 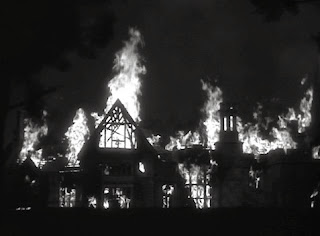 This would seem a neat ending to a haunting were it not for all the unanswered questions Hitchcock has asked in the course of the film's narrative. Specifically, although it seems Olivier and Fontaine had ended the "curse," if we can call it that, and made it as a couple (and mustn't all couples excise their pasts before truly bonding for life?) there remains the thorny issues of trust and truth. Specifically, Rebecca challenges its audiences to ask  whether people ever truly know each other and can trust one another? 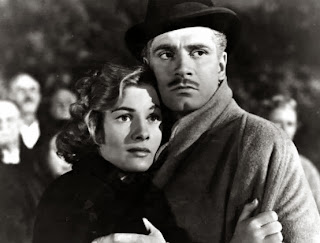 Hithcock, ever the puppet master, would return to this topic with some success in Suspicion. And both in this film and that one, he seems to be asserting the negative. That what we see of another person is but a gesture or a presentation (like a film) and all the while the realness of a person, if we can call it that, is their consciousness, something we can never truly know no matter how much time we spend with them or how many conversations of souls laid bare we have. Nobody in the film knew Rebecca, either. They had pieces of her and assembled they became something like the whole, but it was not quite the whole. Nobody, for example, could say why Rebecca did what she did or why they allowed themselves to fall under her power. Such questions are ultimately unanswerable, and such endings to films are truly what make them great.
Posted by SKW at 2:56 PM