I am quite the Humphrey Bogart devotee, as my profile of him on this site suggests. 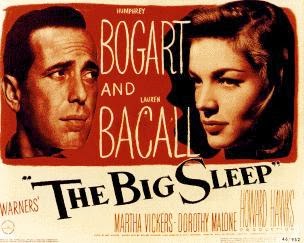 And so I find myself wandering in unfamiliar territory when I make the claim that I do not believe Bogart works well as Raymond Chandler’s infamous shamus in 1945’s The Big Sleep, a film that also suffers from far too much subtlety and not enough naked awfulness (more on the latter below). In most cases, I would defend Hollywood’s by-gone penchant for leaving the crude unsaid and for suggesting rather than showing, largely because we have far too much of the opposite these days, but in the case of The Big Sleep, the production code at the time simply did not allow for the grit and grime and human frailty of Chandler’s pre-war Los Angeles to appear on-screen.

And Bogart, painful as it is for me to write, is part of the problem.

Certainly, he is great in the other film noir detective classic – The Maltese Falcon. 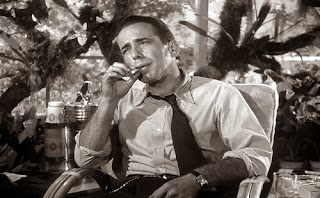 In that film, Bogart shines as Sam Spade, but that is largely because Sam Spade has no human weaknesses, is on a mission of righteous revenge. Bogart also essentially plays him as Bogart. But Phillip Marlow, Chandler’s know-it-all private dick? As a tremendous fan of a writer I consider much more than a mystery hack, I can honestly say there is a tragic grandeur to Marlow that Bogart just cannot capture. Bogart is too sure of himself, too clean and too self-righteous for Marlow, a man whom Chandler writes as a kind of fallen angel, a once-righteous being that is now chock full of cynicism to shield himself from more disappointment, more failure. 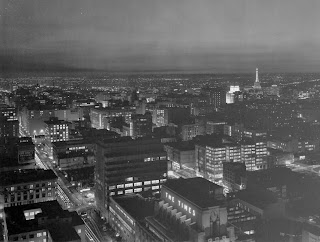 Marlow on the page is a grubby human who makes a grubby living, but he infuses what is an otherwise parasitic and not-so-honest way of living with a kind of noble grandeur by adhering to a strict and unspoken code that raises him above his clients and their short-term interests driven by greed or sex. Bogart, on the other hand, is noble in The Big Sleep, but he has none of Marlow’s ugliness, none of his self-awareness about his character’s ugliness, and consequently, he delivers lines intended to convey pained self-understanding – no doubt gained through previous unspeakable awful events – with such deadpan earnestness that the dialogue comes across a series of clever quips instead of moments of carefully crafted, naked confession.

Perhaps this failure has to do with the Howard Hawks’ impressive but flawed production.

Faithfulness is often a virtue, but in this case, the film tries to follow so many of the novel’s permutations – of which there are many – that the result is dizzyingly confusing onscreen (it all works much better on the page). Indeed, two endings of the film were cut, both of which are available on the DVD, because audiences in 1945 were uncertain exactly what the hell happened in Hawks’ first attempt at a resolution. So he tried again. I could follow events well enough, but then I have read the novel and had that as a primer. Woe to the filmgoer who approaches the story here cold.

This is not to say the good guys are not obvious and the bad even more so.

Lauren Bacall simmers here in one of her three onscreen appearances with Bogart as the more responsible, if somewhat still less than honest, daughter of Bogart’s client. Bacall arches her eyebrows in all the right places and she absolutely purrs all the right lines at just the right moment with just the right amount of licentiousness.

Martha Vickers’ sucking her thumb and batting her eyes as she attempts to lure men to their doom or find a new thrill is much more disturbing and much closer to the mark laid down by the novel. Her portrayal of the little girl all grown up in all the wrong ways is both frightening and positively scandalous. And why the filmmakers went this dark in this one portion of the movie and remained vanilla elsewhere mystifies. She is, at one point, quite clearly drugged, raped and photographed for blackmail purposes. As if this is not enough, Vickers makes it clear her character actually enjoyed the defilement. 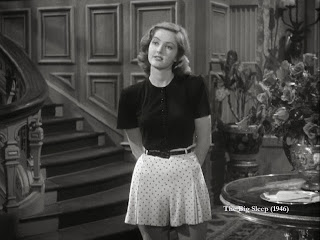 The relatives around Vickers, Bacall included, is far cleaner than Chandler’s dark vision of a noble family that has been dragged down by the ugliness of their environment and the awfulness of their individual obsessions. Part of this, I suspect, stems from the filmmakers needing to make Bacall a legitimate love interest for Bogart. Hence, she cannot be that bad and must have some redeemable qualities, despite being dangerous and very obviously a femme fatale of sorts. The problem is this waters down Vickers performance – to say nothing of the rest of the rogues gallery on display here – and makes her actions appear almost alien. Context is important and the disjointedness apparent in the film goes well beyond its uneven handling of its characters. For example, it is even more difficult for the audience to find a context for the plot’s sheer awfulness, given that the L.A. we see here looks like what it is: The L.A. of glittering movie sets. Chandler’s vision of the city is something more sinister, and is perhaps lost to history after a fashion. That is, Los Angeles now has 70 years of crime and riots to chip away at its glamour and nobody today would be shocked that the events in The Big Sleep could occur there. But Chandler was writing about pre-War California, when it was the land of bright promise and sunshine and people migrated there for the climate and new job opportunities – not to fester in an overregulated, traffic-sodden economy built on an odd combination of Hollywood, the music industry and street crime. Like a more contemporary director, David Lynch, Chandler was peeling back the normalness – to say nothing of the downright positivism that sunny California built itself selling – and showing his audience that private eyes like Marlow needed to exist in the otherwise beautiful climate out West, because people were secretly running drugs, having covert affairs and constantly trying to rob their fellow Californians. 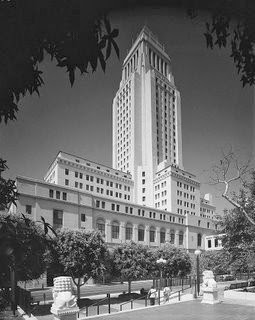 Amongst this, Marlow navigates the city’s hellish underbelly in an almost monastic way. Sure, he smokes constantly, is probably an alcoholic and his way of making a living could be considered somewhat dubious, but given the characters around him, the ones his job forces him to deal with, he is simple, pure and perhaps even holy. Indeed, Marlow never overcharges, never switches side or falls for a femme fatale, the latter of which the movie ignores (there has to be a love interest, right?). Thus, The Big Sleep’s biggest disappointment is that this Marlow is not present on the screen. Bogart’s Marlow is not better than his fellow characters, he is simply smarter and less driven to vice. I do not think Chandler is interested in this kind of relativistic judgment. Hard and ugly judgments are more his thing. And make no mistake, this is not an ugly film. The times just would not allow it and the actors, in most cases, just did not have that kind of depravity in them.
Posted by SKW at 8:12 AM