Greed is certainly an interesting topic, given the recent collapse of the world economy due to what Gordon Gecko notoriously deemed “good” in the contemporary classic Wall Street.
John Huston’s The Treasure of the Sierra Madre may be separated from Wall Street by more than 40 years of filmmaking, but the former’s depiction of how wealth can pervert human personality is equally as powerful as Oliver Stone’s tome to excess (a movie which ironically encouraged a generation of filmgoers to want to become stockbrokers). 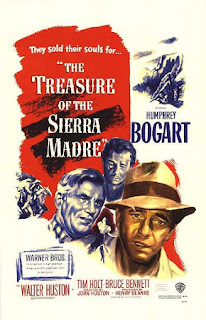 I doubt anyone can watch The Treasure of the Sierra Madre and walk away with a strong desire to take up a pick and shovel and go gold-mining. The audience’s lack of enthusiasm has plenty to do with gold-mining being antiquated and back-breaking work, of course, but I suspect part of the reluctance stems from the film’s depiction of the incredible amount of violence that surrounded the trade. In the dusty and desolate landscape Huston paints, finding and then mining the gold is only half the battle.
Along the way, you have to take pains to disguise what it is you are actually doing – lest the government or some other prospector swoop down – and you have to forever be on the lookout for being robbed by your fellow miners. Then, having successfully mined the substance, you have to transport your gold across a godforsaken land populated almost entirely by bandits and Indians, all of whom are more than willing to knock you on the head and to take away your hard-earned stash.
As interested in these physical rigors as the film is, the real meat of Huston’s efforts comes when the movie focuses on how the sudden acquisition of wealth fosters a dangerous kind of paranoia and desperation that can eventually compel good people to commit violence.
Even more to the point, the film essentially argues “honor” among coworkers and friends is little better than that among thieves – if gold is involved somewhere in the equation. This is due primarily to the emotional qualities gold possesses for those who seek it.
Gold is a means to an end, a kind of cipher, in which “gold” stands in for whatever larger dreams a man may have. Thus, when Humphrey Bogart’s character talks about dreaming “about piles of gold getting bigger and bigger and bigger” it is not the gold he is really thinking of, but all the pleasures the metal can provide. Such is the power and attraction of the dream fulfillment gold promises, as long as “there's no find, the noble brotherhood (between men) will last. … But when the piles of gold begin to grow... that’s when the trouble starts.” 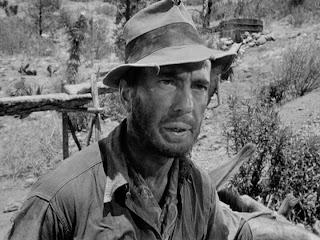 Our main prism for the trouble is the aforementioned Bogart.
When the film opens, the normally classy Bogie is so down and out he physically yearns for a cigarette a man has nonchalantly tossed on the street. Desperate and almost without pride, Bogie makes an attempt to grab the still-smoldering bud, only to lose out to a street urchin. Eventually, he meets up and forms a kind of hobo partnership with Tim Holt, but the alliance fails to alter their luck. Both men are taken advantage of by an unscrupulous contractor who recruits them to do back-breaking work and then fails to pay. When the pair eventually stumbles across the man who owes them the money, they beat him savagely – but crucially, they only take what cash is owed them, and no more.
They decide to try their hand at gold mining after they come across a kooky old man – played by Walter Huston, the director’s father – who has been in the business all his life. The old man seems to have a feel for how the expedition might turn out, but he goes along anyway because for him the act of mining is an end in and of itself (whereas Bogart and Holt want to strike it rich).
The fun does not really get started until the men strike gold. From that point on, Bogart’s greed-driven descent into paranoia is something to behold. He mutters to himself expertly, sweats and exhibits the incredible physical picture of a man no longer in control of his own thoughts or emotions. No assurance is enough for him as the world becomes a darker and more dangerous place (now that he has something to horde and protect). Such is the power of Bogart’s performance, when he robs his partners and leaves one for dead, the audience is unsurprised and shocked at the same time.
Having metaphorically lost his head for gold, Bogart is eventually decapitated by bandits within sight of his final destination. Ironically, the bandits who kill him care little for material wealth. The act of thieving and stealing is an end unto itself for them. So little are they interested in valuables, they do not recognize Bogart’s gold when they discover it and they let the precious powder scatter in the wind (they are only interested in selling Bogart’s mules to buy more guns so they can commit more robberies).


The bandits’ endless cycle of violence is less greedy than the miners’ perpetual quest for wealth, but it is no more purposeful. Well before the trio set out to Sierra Madre, the old man makes it clear he has struck it rich many times before, only to lose it all and begin the process over again. Bogart and Holt ignore this insight, convinced they are powerful enough to avoid repeating the same mistake. They are wrong, and what the film seems to be saying about their incorrectness is that anyone who ties themselves to a purpose no bigger than themselves is doomed to eke out a life in which the selfish cycle never ends – and consequently happiness never arrives.
In contrast, there is a beginning, a middle and end to family life, and this, albeit very subtlety, seems to be the only bit of hope the film dangles in front of an audience who has just witnessed the worst of what human psychology has to offer. The old man shrugs off the loss of his gold and chooses to live out his twilight days among the local Indian village, where presumably he will take a wife and settle into his role as the physician. In similar fashion, Holt will go to Texas, where it is strongly implied he will take up with the wife of the prospector who died defending the trio’s mining camp. The survivors of this tale of greed, in other words, are all men who chose to settle down, begin a family and live a life of steady occupation and reward.
In that sense, this film is blindly simplistic and fairly predictable.
Greed is bad. The iniquitous meet an ugly kind of frontier justice. Those who understood the ill effects of gold eventually sought to regulate their appetites and establish a more simple – and safe – way of life. Reality, of course, is much more complicated than this, much more upside down. But this film is not about reality. For all its grit and grime, this is a fairy tale of a movie – a lopsided and ugly one, to be sure, but a fairy tale nonetheless. And as such, it is a towering achievement that leaves the audience with a profound sense of insight at its conclusion.
I suspect if you showed this film to the men in gray suits who routinely plunder the markets from their corporate towers, they would chortle at the naiveté located at the picture’s heart. In the world of Wall Street, more often than not, the paranoid and greedy Bogart’s win, and the spoils of their twisted labor do not idly blow away in the winds of fate. If life were more like the movies, we would not have to live with the results of such morally bankrupt calculations.
Posted by SKW at 12:23 PM