The Violent Crucible of Creation

First, a confession: I am probably one of the few people who believe famed director Sergio Leone became a better filmmaker with each picture he made.
For most moviegoers, The Man with No Name Trilogy is the Italian’s masterpiece (and the exemplar prime of all Spaghetti-Westerns). And there’s good reason to think so. The Good, the Bad, and the Ugly, the final of the three, is a devastatingly epic movie whose convoluted moral landscape and powerful performances led some to label it one of the best films of all-time.
As for me, I will cast no stones at that picture here, save one…
As good as The Good, the Bad, and the Ugly is, I think Once Upon a Time in the West – Leone’s next effort – is far superior in terms of its scope, its construction and the effectiveness with which it presents director’s quintessential themes. For many, Leone’s career ends – or should have ended – with Once Upon a Time in the West. Accordingly, this line of thinking believes Leone’s abilities behind the camera nosedived at the onset of the 1970s and films such as Duck, You Sucker! (often referred to as A Fistful of Dynamite) and Once Upon a Time in America are dour afterthoughts to a career best remembered by earlier efforts.
I heartily disagree. 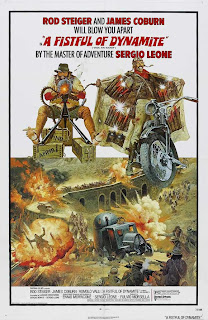 Having used up all his ideas about traditional Westerns in the Once Upon a Time in the West, Leone cleverly pivots away from the genre with 1971’s Duck, You Sucker! and confronts his audience with a visionary depiction of political revolution as farce. The result is bold and complicated film that functions on many levels and comes closer to qualifying as art than anything else Leone did in his spectacular career.
The dramatic and philosophical direction Leone intends to go, as well as the fact we are a long way from Clint Eastwood and gold-inspired shootouts, is clear when the film opens with this ominous quotation Mao:
“The revolution is not a social dinner, a literary event, a drawing or an embroidery; it cannot be done with elegance and courtesy. The revolution is an act of violence.”
To ram home these points, one of the first scenes involves a stagecoach full of upper-class passengers who take turns humiliating Juan Miranda, a lowly Mexican peasant who connives his way into their presence. Miranda, played with delightful nastiness by Rod Steiger, eventually robs the coach at gunpoint, rapes the lone female passenger and then revenges himself on the men by kicking them downhill into a gully filled with mud.
What begins as a rather conventional bandit picture – albeit one with striking political overtones – is immediately shaken up by the combustible introduction of the film’s other main character, John H. Mallory. A former IRA activist, Mallory is an expert in explosives who came to Mexico to do demolition work for a German mining company. Throughout the film, his disdain for “uniforms” and other figures of authority is the palpable product of his unspoken anarchism (at one point, he is filmed reading Bakunin’s famous treatise on the topic). Mallory is confronted by Miranda and his gang and subsequently tricked into becoming an outlaw. Mallory eventually returns the favor by tricking Miranda into helping the Mexican Revolution, despite the latter’s complete lack of sympathy for the revolution and total disinterest in politics.
The fact the setting of this film has shifted from the America to Mexico and the timing moved ahead from the Old West’s traditional 19th century period to 1913 further illustrates Leone’s explicit desire to turn his back on the ferocious isolation he chronicled in Eastwood’s The Man with No Name trilogy. However, there is a thematic connection between those pictures and Duck, You Sucker!
More specifically, Eastwood begins his three films essentially as a loner.
In A Fistful of Dollars, he commits himself to no cause, choosing instead to play two rival factions off each other in a desolate town. In A Few Dollars More, his second outing, he is paired with Lee Van Cleef in what can be construed as a heroic quest. The Good, the Bad, and the Ugly begins with an attempt to restore Eastwood to his lone gunman status, only to see events in the film force him into various undesirable partnerships. Along the way, he is – for the first time in the series – forced to acknowledging the suffering of others (most obviously the Civil War soldiers) and to realize that “going it alone” is not always a realistic approach.
This is important because Leone himself claims Duck, You Sucker! is essentially a “buddy” picture that documents the friendship between Mallory and Miranda.
To explain, Miranda begins the film as an almost primitive human being, in that his moral code is entirely the amoral tribalism bound up in familial connections. His gang is made-up of family members and his ambitions will not tolerate any horizon that is not associated with his family’s profit. This is a kind of familial narcissism, in which all other non-familial people, such as those on the carriage, are a means to an end and nothing more.
Mallory’s friendship forces Miranda to accept that non-familial people can have value, and this ultimately shakes-up Miranda’s worldview and forces him to accept the importance of the politics he has hitherto ignored. The politics become even more important when they inadvertently lead to the demise of his family and Miranda realizes that who is in charge of a country can literally mean the difference between life and death.
For Mallory’s part, his friendship with Miranda is purely redemptive. Through a series of flashbacks, it is gradually revealed that Mallory’s best friend back in Ireland exposed the explosive expert’s revolutionary activities to the authorities, most likely because the two men were competing for the love of the same girl. Not only did this betrayal lead to Mallory leaving Ireland, but it also strengthened his feelings toward anarchical sentiment (if friendship is a sham, then all of society’s bonds must be equally empty, right?).
As important as the relationship between the two lead characters is, their interactions are also functional, in that they serve Leone’s larger, more ambiguous intent.
As the opening quotation told us, this is a film about violence and revolution. However, the difference between this picture and the many others that have explored these subjects is that Leone ultimately advances no agenda and offers no conclusive ideology. Those who criticize the film for this – the sort, who I suspect yearn for this picture to morph into a kind of Battleship Potemkin – have missed the one definitive statement Duck, You Sucker! does make. 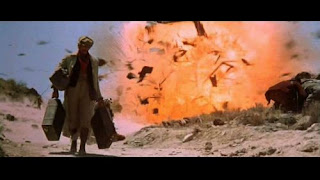 Put simply, this movie is ultimately about the act of creation, and it explores the notion that all forms of creation – be they political “revolutions” or otherwise – are born from a violent combination of chaos and destruction. This is why The New York Times is correct to observe that film feels “rapturous and more than slightly insane.” Creation typically involves both sudden rapture – or Eureka moments – and the painful all too often zany process of organizing one’s inspiration.
Thus, like the political revolutionary who attempts to breakdown society so he can reorganize the mob within new political boundaries, the artist’s work is an imperfect effort to impose order on formless media – the blank canvas, the shapeless lump of clay or unexposed film reel. Through the imposition of structure, both the revolutionary and the artist hope to create shared understandings that easily translate from person to person.
I have no way of knowing for sure, but I suspect Leone worked off pure emotion for most of this film. It just feels spontaneous and delightfully unmanaged. Ambiguity abounds, themes are introduced and disregarded. Entire scenes can seem aimless and irrelevant (until the film is complete). This may sound terrible, but it is not. What Duck, You Sucker! does is take audiences through the absolute fury of creation, and along the way, it punctures the tired and elitist notion that human creativity – especially as expressed in politics – is ever a finished product.
“Don’t tell me about revolutions,” Miranda yells at Mallory. “What happens afterwards? The same fucking thing starts all over again!”
Leone himself said: “I have the film say, in effect ‘Revolution means confusion.’”
Confusion is where creation comes from. It is the void, the chaos from which organization will eventually emerged, but before that process begins to take shape, violence and upheaval have to occur. Miranda has to lose his family in order to see the importance of politics – which admittedly he never wholly subscribes to – and the value in non-familial friendship. Mallory must go through the fire of another bloody revolution to realize he can trust someone and depend on them, regardless of the sort of person Miranda is.
And all of this unfolds in scenes of disturbingly violent grandeur or brutal simplicity. The mass executions in the city or the confrontation with the column of soldiers in the desert are both as compelling and beautiful as anything Leone ever filmed, and what is more, I would argue their meaning is far weightier than similar scenes in his previous work.
This is not to say the film is without problems.
It is much too long, for starters, and it undoubtedly suffers from its oft repeated flashbacks and its overly lush soundtrack. Still, for all its blemishes, this is an epic piece of filmmaking, one in which Leone clearly expanded as an artist and a thinker to his outermost limits. Far from perfect, with little or none of the neatness of his previous efforts, Duck, You Sucker! is the boldest and most radical piece of filmmaking the Italian maestro undertook, and it I think it may be the most important movie he ever made.
Posted by SKW at 10:53 AM