The pitch for Battle of Britain probably sounded incredible.
I can imagine Guy Hamilton, flush from his success with Goldfinger, crooning to some studio head about how they would hire just about every notable British actor working during that period, find entire wings of contemporary World War Two aircraft and lump them altogether to make an epic film about one of the past century’s most important – and narrowly decided -- battles. And as far as all that is concerned, Hamilton succeeded... 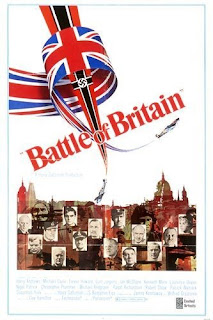 Laurence Olivier, Trevor Howard, Robert Shaw, Christopher Plummer, Michael Caine, Michael Redgrave and Susannah York all appear in the film, as do vintage Spitfires, Hurricanes and Messerschmitt aircraft. With a $12 million budget and more than 100 total planes employed, the film broke new ground for depicting aerial combat in cinema, and set the standard for such filming until toppled from its perch by a rash of 1980s movies about jet fighters (Top Gun being the most notable).
Indeed, a great deal of the film’s ultimate weakness lies in Hamilton’s singular obsession to explore what could and could not be captured in the air on camera. The result is a film in which what happens among the clouds outweighs the drama on the ground below, and the audience is forced to suffer through repetitive battle sequences that become almost indistinguishable from one another. Silly explosions of red paint standing in for blood do not help matters, either.

Following the plot is treacherous business, especially if you are not a history buff. To be sure, the film does its best to chronologically present dramatizations of actual events that occurred when the Nazi Luftwaffe attempted to destroy Britain’s air force in 1940, but the picture fails to package what is undoubtedly an exciting narrative in a logical way that makes sense. Part of this difficulty, no doubt, lies in the formlessness of the Battle of Britain itself -- key decisions and critical confrontations transpired during a period of several months, not a few days or several weeks. The other part lies in a horrible lack of dramatic structure.
More specifically, by choosing to include as many characters as it does, we end up never really knowing or caring about any of them. Shaw, for example, is never even named (he is simply called “skipper”), while Michael Caine appears and then expires so quickly, one is left to search the credits for his given and surname. 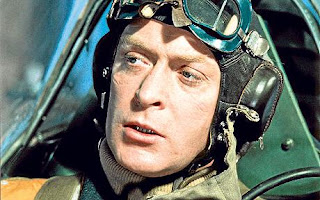 Another Briton, William Shakespeare understood history is not a five-act play, with a beginning, a middle and an end, which is precisely why his histories focus on the human dramas – either real or imagined – of the people involved in the noteworthy events. Nobody really knows how Brutus felt about Caesar, before or after Caesar was knifed in the Roman Senate, but watching a play about Brutus agonizing over whether his loyalty was to the state or to his friend makes for great entertainment. To borrow a cliché, it also helps bring history “alive” in a tangible way audiences of any era can relate to.
An attempt in Battle of Britain is made to follow a troubled romance between Plummer and York, but the filmmaker’s heart never really seems in this effort, and as a result, these scenes seem clumsy and out of place. Worse yet, coming as they are – sandwiched between battles or meetings of historical importance – they feel foolish. The film should have chosen to stay at the tactical level (as movies like Patton or Midway do) or taken the time to invest in people and events affected by the battle in the skies. Trying to have it both ways means doing neither well. 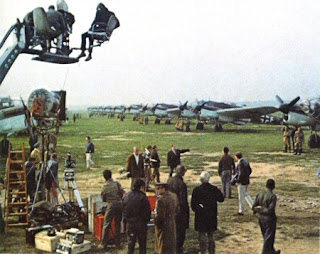 But for all these fumbles, those who delight in detail can find plenty to relish here. From the planes themselves, to the period-accurate BBC broadcasts and the humorous and believable scenes of boys fighting over which German planes are streaking over the sky or handing a downed RAF pilot a cigarette, the mood of the picture feels right. The Anglophile in me wanted more Churchill (he is merely glimpsed), perhaps with his actual speeches (their text bookend the film and are never read aloud or replayed), but the decision to keep the great man at one remove probably served the plot better.
As for the aerial combat, blood bursts aside, the action stands the test of time rather well. If I have one complaint in that department it is that the dogfights are too difficult to follow and too numerous to carry the weight the filmmakers want them to. As an audience, it is also never really clear what factor turned the battle and allowed Britain to win (after all the ballyhooing about being such an underdog). I know why, of course, but not from this film... 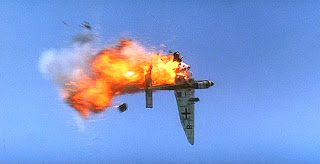 In sum, Battle of Britain remains beloved by a generation of British filmgoers. Its solitary sin is that like Icarus it flew too near the sun, in that its ambitions outstripped its abilities. Even so, it is difficult to imagine another effort doing as well this one does at manhandling a complex and important clash into a discernible narrative. History is funny like that. It is just too big and too complex for movies.
A good retrospective story on the now-legendary production can be found here.
Posted by SKW at 12:43 PM